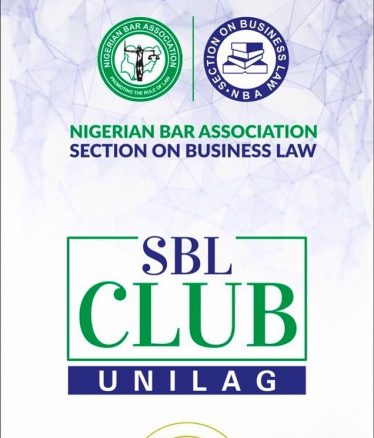 The initiative is part of the section’s objectives to build capacity and promote the development of commercial law practice in Nigeria.

It is the first in a series of clubs being set up in selected universities across the country.

NBA-SBL Young Lawyers’ Committee Chairperson, Olubukola Olabiyi,  said the Section had keen interest in the development of the legal capacity of law students.

She said: ”It is hoped that through the Young Lawyers Committee of the NBA-SBL, we would facilitate this development by way of mentorship and internship initiatives as well as invitations to SBL committee programmes focused on various areas of specialisation.

“We appreciate the interest and assistance of the UNILAG Faculty of Law and Law Students’ Society in establishing this Club in their institution and look forward to achieving note worthy progress at the UNILAG and other tertiary institutions.”

“The SBL Club is primarily aimed at  introducing Law Undergraduates to contemporary issues in  Commercial Law and Practice that may not yet form part of their curricula but are a ‘must have’ if they are to effectively compete on the global stage as Law Students and ultimately, in the future,  as Commercial Law Practitioners.

The Dean, Prof Ayo Asenuwa, welcomed the initiative, expressing faith in the students’ ability to utilise the opportunity.

“We are happy that you have considered our faculty for the very first of this capacity building project and we pledge the support of the management to ensure the success of this laudable initiative,” she said.

Vice President of the Law Students Society, Ms. Oluwatamilore Sowunmi thanked the Council of the NBA-SBL for the initiative.

After the inauguration, a special ADR session was held by the NBA-SBL committee on Arbitration & ADR, for the benefit of the students.

Chair, Advisory Board of the Lagos Court of Arbitration – Young Arbitrators Network (LCA-YAN), Mr Isaiah Bozimo,  introduced the students to the practice of ADR.

According to her, disputes were generally an inevitable part of human interactions arising from different human transactions including economic activities, family relationships, community, neighbourhood and other civil activities.

“When these disputes arise, it is only natural that the parties will want to resolve them peacefully and the common method of doing so without going to court is to go through the Alternative Dispute Resolution process. The one thing all disputes share is that ultimately they involve people and people involve relationships,” Akinwunmi said, while harping on the importance of maintaining good relations in the resolution of disputes and the need to achieve this through mediation.

The CEDR (UK) Accredited Mediator and SCMA Accredited, Mediation Advocacy Trainer, went on to school them about the attributes of a good mediator; listing those to include, credibility, patience and tact, objectivity alertness, adaptability, perseverance, appearance, demeanor, amongst other things.

Fundamental Human Rights: A Sacrosanct & Indispensable Part of the Constitution