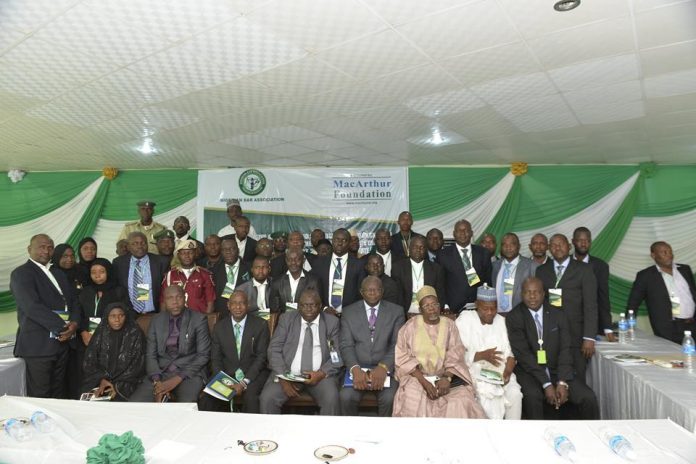 The nationwide sensitization programme for states that are yet to adopt the ACJA as their procedural law for the administration of criminal justice in Nigeria, took the NBA-MAC ARTHUR project team to Dutse, Jigawa State on Monday 5th of February, 2018 for a one day senzitisation workshop.

The NBA Chairman Dutse branch; Baffa Alhassan Esq gave the welcome address and noted that the workshop couldn’t have come at a better time. He informed participants that the Jigawa state ACJ Bill was introduced to the State Assembly as an Executive Bill which shows the readiness of the state to domesticate the ACJA 2015. He on behalf of the branch appreciated the National body for choosing Jigawa State for the sensitization workshop and was hopeful that at the end of the programme, the State will experience a smooth implementation of the Act.

NBA 1st Vice-President, Caleb Dajan Esq who represented the NBA President A. B. Mahmoud OON, SAN, apologised for the absence of the President. He stressed the importance of the ACJA in the Criminal Justice System and stated that it is the Association’s desire that at the end of the day, the aim of the workshop will not only be achieved but contributions made will lead to a smooth implementation of the Act in Jigawa State. He ended his address by appreciating the presence of officers of various security agencies, who are also key partners/players in the administration of criminal justice.

Mr. Caleb Dajan later inaugurated the nine (9) member state committee assigned with state level tasks to build partnership and work in collaboration with key stakeholders working in the area of domesticating and implementing the ACJA 2015, in Jigawa state.

The Project Coordinator, Muritala Abdul-Rasheed Esq, gave the project overview. He noted that, the uniform adoption of the ACJA in all 36 States of the Federation has been hindered by the provisions of the 1999 Constitution of Nigeria, which vests the States Houses of Assembly with the power to make laws for the peace, order and good government of the State among other legislative provisions.

He added that, the ACJA is geared towards ensuring that the system of administration of criminal justice in Nigeria promotes efficient management of all criminal justice institutions, speedy dispensation of justice, and protection of the rights and interests of the suspects and the victim of crime.

He stressed further that, “the ACJA will fall short of its potential if it only remains a federal law. In view of the need for uniformity, clarity, and better administration of justice throughout the country, it is essential for States to adopt this Law.”

He urge Jigawa state to join other states in the country in the passage of the ACJA bill to law.

He assured participants and all stakeholders concerned that the NBA-MacArthur project will intensify its effort on advocacy, training and retraining of judicial officers, lawyers and other stakeholders in the justice sector in Jigawa State, on the innovation introduced by the ACJA through its institute of Continue Legal Education (ICLE) with a view to making them friendlier with the users of the institutions of justice and consumers of legal services.

The Honourable Chief Judge of Jigawa State, ably represented by Hon. Justice Ubale Ahmed, commended the NBA project team for organising the sensitization workshop and encouraged active participation and contribution from all participants.

Prof. A. B. Ahmed of the Bayero University, Kano who was the Keynote Speaker gave an overview of the Administration of Criminal Justice Act (ACJA) 2015.

He began by saying that, the Criminal Justice can be defined either as a system or as a process. “As a system it is a convenient arrangement of a number of state-run bureaucratic institutions that deal with offending and offenders. It is established by the state to manage crime and impose penalties on violators of criminal law.” He added that; “as a process it involves the procedure of arrest, charging, trial, sentence and confinement of the suspect.

Prof. Ahmed maintained that, how well a country manages its criminal justice system affects its overall performance on the governance index.

“A country that gets its criminal justice system right has effectively addressed a great part of its governance concerns because of its centrality to order and stability. Justice and development are inextricably interwoven. Without justice there can be no be Order and Stability and without Order and Stability there cannot be development. Injustice breeds anger, social strife, disorder and instability. So there is probably no instrument more potent than the ACJA for initiating change and restoring sanity to any society.”

He added that; “The Act responds to Nigeria’s dire need of a new legislation that could transform the CJS to reflect the true intent of the Constitution and the demands of a democratic society; eliminate unacceptable delays in disposing of criminal cases and improve the efficiency of criminal justice administration in the country.”

He went further to point out some innovations introduced by the ACJA 2015 to include S.6; Unlawful detention which he described as the gateway to ACJA, S.8; which provides that a suspect shall be accorded humane treatment, having regard to his right to the dignity of his person and should not be subjected to any form of torture, cruel, inhuman or degrading treatment, S.10; which mandates the police upon arrest of a suspect to take inventory of all items or property recovered from the suspects and the police officer and the suspect must duly sign the inventory, S.15; Record of Arrest, S.16; Establishment of a Police Central Criminal Registry, S.110; which introduces Time Lines in Magistrate Courts, S.396; Speedy Trial etc.

He concluded by asserting that: “The Administration of Criminal Justice Act is a bold and courageous attempt to improve the criminal justice system in Nigeria. This is because of the fact of the realization that effective criminal justice system is fundamental to democratic governance and the rule of law. It is very encouraging to note that so many states have embraced this revolution. Therefore Jigawa State should not be left behind.”

The Director Public Prosecution (DPP) ministry of Justice Jigawa State; Musa Muhammed Imam, Esq noted that the Jigawa State Administration of Criminal Justice Bill has 493 sections with little modifications from ACJA 2015. He said one of such modifications is the section that stated that only lawyers are allowed to prosecute, which he observed , cannot be implemented in Jigawa State because the state lack the number of lawyers to implement such provision.

Responding, Prof. A. B. Ahmed frowned at the suggestions. He said rather than resorting to self-defeat, the state should employ more lawyers. He also appealed to Jigawa state to adopt the Kano approach where they marry the shariah laws with some of the provisions in the ACJA.

The workshop ended with Critical stakeholders in the justice sector in Jigawa state calling on the state House of Assembly to expedite action on the passage of the ACJ bill which is still at the committee stage.