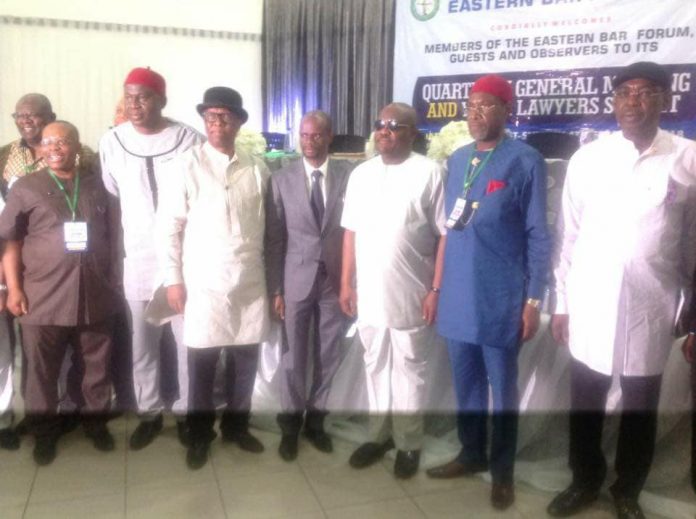 We earlier showed you a report indicating that there was violence and walk-out at the EBF quarterly meeting following the adoption of Arthur Obi Okafor SAN as a consensus candidate by the EBF. Che Oyinatunba gave an account of what he calls a fight between two factions of NBA in Aba in rebuttal of the news.

My restless attention has been drawn to an article on a blog called the Grundnorm alleging that violence erupted at the Eastern Bar Forum meeting and that there was a walk out. This orphaned article is credited to the editor. There is also another flying like a housefly with a broken wing attributed to one Atata.

I am tempted to ignore them as ranting of disgruntled ants and sore losers but if a taboo lasts for a year, it becomes tradition and an uncontroverted lie if often accepted to be true. An interested elder in his brother’s widow, do not sit at home and watch children play with a widow’s breast.

I am in Port Harcourt, actively following EVERY event with pictorial evidence. I write as a witness of truth.

I state as a fact that, there was a fight and the fight was between two factions in NBA Aba Branch over custody of their branch’s bus and had nothing to do with EBF. I make bold to state that I am the only person with video of this fight. A faction brought a thug, a non-lawyer to hijack the bus and he was resisted, over powered and handed over to the police. This incident took place outside the venue of EBF meeting and was neither remotely nor immediately connected with EBF.

ALSO READ   Mohammed Fawehinmi to be Buried August 27 In Ondo

Let me digress, NBA Aba Branch, is the home branch of Prof. Ernest Ojukwu and one cannot wonder why he had not been able to solve this local problem and allow it to fester this long to the extent they they have to engage in this show of shame?

Akin to this, is a leadership crisis in NBA Abuja (Unity Bar), the “home branch” of Mazi Afam Osigwe. Afam Osigwe as immediate past General Secretary of NBA and he wants to rule the over 114 NBA branches nationwide? Has charity stopped to begin from home? Who should trust and buy a fire extinguisher from a fire extinguisher seller whose house is constantly on fire?

I state that there was no walkout by any group. The adoption was done at Hotel Presidential while the meeting took place at NBA Port Harcourt Secretariat. The Chairman of the Screening Committee, presented his Committee’s report and motion for adoption of the Committee’s report was moved.

In 2012, it was the time of the Niger Delta component of EBF to produce presidential candidate. Akwa Ibom-Cross Rivers failed to produce a candidate and River-Bayelsa axis brought out a candidate in the person of Okey Wali, SAN. The East Central State or Biafran component if you like, refused to support Emeka Ngige who showed interest on the grounds that it was the turn of the Niger Delta to produce a candidate. Is it the fault of Biafrans that Akwacross failed to negotiate with their Rivers-Bayelsa brothers?

EBF carried out the provisions of its constitution and as a democratic institution, it allowed observers from Arewa and ooduwa to monitor the process. It was by Electoral College and members of the 9 states participated and voted for any candidate of their choice.

People should know how to be good losers and good team players. Attempting to discredit EBF, is like a drunkard measuring his manhood with an iroko tree.

Aspirants who feel that the process was tinted, slanted pendulum or satanic and other unfortunate adjectives that had been used to describe this transparent honest process, should stop hiding behind a finger and speak up. Interestingly, they are all members of EBF. Why allow your supporters to speak for you or are they ranting to justify the money given to them to bark at EBF?

In the absence of any complaint, petition or appeal against this adoption personally written by Mazi Afam Osigwe, Professor Ernest Ojukwu and Paul Usoro, SAN, they should call their supporters to order as nobody has monopoly of madness, propaganda and destructive information.

They should be good sports men and congratulate EBF and work with EBF to make sure that EBF tenure as President of NBA, is the best and most lawyers welfare minded in many more years to come.

Those calling for South South Forum, should go ahead. It is democracy, the more the merrier but one should not want a bridge to break because he had crossed. Those who throw stones in the market, should first make sure that he had taken census of his family members that went to the market. The young lawyers, who are being used to insult elders, destroy structures, should know that tomorrow is pregnant and they will need a structre to midwife their own ambitions. Why ruin your tomorrow because of a candidate that is nearing his twilight as NBA career politician? May the fly without legal adviser, follow the corpse to the grave; a word is enough for the wise.

I am off to the banquet at Rivers State Government House.

NBA Looming Crisis – The Undisclosed Facts in the Face-Off Between...