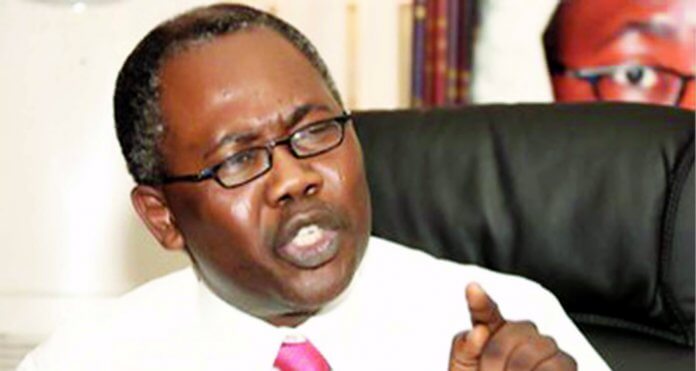 The immediate past Attorney General of the Federation and Minister of Justice, Mr. Mohammed Adoke, SAN, has denied allegation that he pocketed $2.2 million from the alleged $1.2billion Malabu Oil block fraud.

Adoke, in a statement, yesterday, denied an online media report he said quoted him as describing the entire transaction that led to the transfer of OPL 245  as a “Presidential Scam.”

Adoke who dismissed the said report as “fake news,” bemoaned what he termed a deliberate attempt to pitch him against former President Goodluck Jonathan.

He said he neither granted interview to any foreign media outlet nor offered to bribe an Italian journalist to suppress facts linking him to the alleged oil block scam.

It will be recalled that the Economic and Financial Crimes Commission, EFCC, had alleged that Adoke, a former Minister of Petroleum, Dan Etete, an oil mogul, Aliyu Abubakar and Malabu Oil & Gas Ltd, had sometime in 2000, corruptly received the aggregate sum of $801million in relation to the grant of oil prospecting license in respect of OPL 245 from Shell Nigeria Exploration Production Company, Nigeria Agip Exploration Ltd, and ENI SPA.

Adoke in the statement, said he did not benefit from the transaction.

“Nigerians know that I am not a stakeholder in Malabu, Agip-Eni or Shell, neither did I benefit from the proceeds of the sale of OPL 245 by Malabu Oil and Gas limited.

“If indeed, I was given $2.2 million for the OPL 245 transaction, as alleged by the EFCC, why would I be offering to give the money to the imaginary journalist?

“This is clearly a case of a phantom RAI journalist that exists only in the figment of the imagination of Samuel Ogundipe.

“Furthermore, Micheal Nomah whom Ogundipe claims to have contacted to react to his fake story is also unknown to me and has never represented me on any legal issue.

“I therefore, want to appeal to well meaning Nigerians especially my colleagues, friends and family who read the fake story and were alarmed by the extent of malice and falsehood therein to disregard the story in its entirety and be mindful of the fact that Ogundipe’s publication was only designed to “Pitch me against my Principal, His Excellency, ex-President Goodluck Jonathan, whom I hold in high regard with a view to causing ill will and disaffection between us.”

1507 New Wigs Called to Bar Amid Tight Security in Abuja