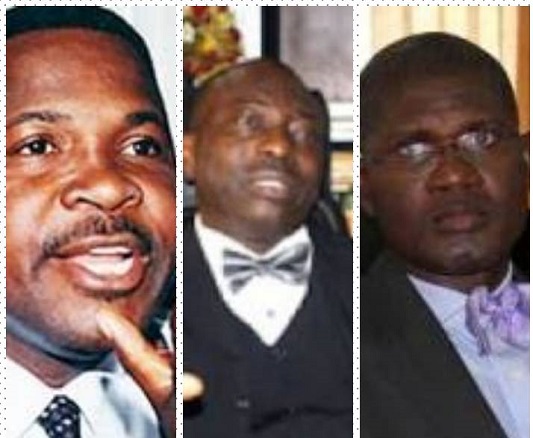 The Senate, yesterday, took a swipe at Inspector- General of Police, Mr Ibrahim Idris, asking him to stop holding on to the straw on why he refused to comply with the invitation to explain what the Police were doing to check the spate of killings across the country.

According to the Senate, the real reason for the invitation of the IGP was for him to brief the lawmakers on the cases of wanton killings in the land and how to remedy the situation.

This came as four senior lawyers differed on the powers of the Senate to invite the IGP.

IGP holding on to straw—Senate

The Senate in a statement by Chairman, Senate Committee on Media and Public Affairs, Senator Sabi Abdullahi, noted that matters concerning the arrest of SenatorDino Melaye had, in fact, been overtaken by events.

He said: “We noted the response issued by one Jimoh Moshood on behalf of the IGP following Wednesday’s resolution of the legislative chamber on the continued refusal of the IGP to honour the invitation for him to come and explain what the police are doing to halt the spate of killings across the country.

“Let it be known that the IGP, by trying to reduce the reason for his invitation by the Senate to the arrest of Senator Melaye is simply holding on to straw. The issue of Sen. Melaye’s arrest has been overtaken by events. The courts are already handling the related cases.

“Our main concern is the security crisis across the country where people are being killed in scores on daily basis. The primary responsibility of the Police is maintenance of law and order as well as protection of lives and property.

“If there is a breach along the line of this responsibility, we do not see why the IGP should feel he cannot be invited to offer explanation to the arm of government, which is constitutionally empowered to ask questions and investigate the breach.”

Reacting to the powers of the Senate to summon the IGP, Falana said in an interview on Channel Television monitored in Lagos: “The President or the governor of a state cannot be summoned by the National Assembly. There is no such power given to NASS by the constitution to summon everybody.

“It has given the President the discretion to address the National Assembly either jointly or separately on any matter of national importance.

“The Senate didn’t get it right this time around. By virtue of Section 67 of the Constitution, the National Assembly or either chamber can summon a minister when the affairs of his or her ministry are under consideration.

“The only other occasion where a public officer can be summoned by the National Assembly is when proceedings are ongoing to expose corruption (Section 88) and when a law is being debated either with a view to amending it or to have a new law entirely.”

Senate has power to summon any person—Ozekhome

Disagreeing with Falana, Mr. Mike Ozekhome, SAN, said: “I am surprised to hear such view having regards to the Senate. I am also surprised that opinion having regard to the oversight function powers of the Senate under section 88 and 89 of the 1999 Constitution.

“Not only does the Senate has the power to summon any Nigerian with regard to the matter stated under the section, which has to do with matter on which the National Assembly has power to make laws .

“The Senate under those sections also has the power to summon any person and issue a warrant of arrest against any person who refuses to honour such summons.

“Besides these constitutional provisions, we also have the Legislative Houses power and Privileges Act under sections 3 and 4, which gave the Senate power to summon any person to come and testify on any issue and bring documents and memos that the Senate desire from such a person.

“The action of the IGP is nothing but executive rascality which diminishes and ultimately destroys democracy incrementally and instalmentally. Such action must be deprecated.

It’s not out of place —Pedro

“I agree under the section that they can only summon the minister not the IGP. However, in the light of what is happening in the country, it is not out of place for the Senate and the Reps to carry out an investigation.

“I believe that under section 88 of the 1999 constitution, National Assembly has the power to invite him. However, there is a need to pass a resolution to that effect that they want to conduct investigation into the affairs of any person or authority.

“‘Any person’ has been interpreted by the Interpretation Act to include corporate body, any juristic person to include any officer.

“My belief is that the IGP also falls into this category as an authority. So, if the Senate want to conduct investigation into the affairs of the person in administering of any law, they can invite the person.”

Mr Norrison Quakers, SAN, said: “The issue of whether the Senate has the power to summon any person is a constitutional issue provided for in Section 89 (1) (c) of the Constitution, which must be in furtherance of its powers to conduct investigations in relation to matters or things it has power to make laws and the conduct of affairs of any person, authority, ministry or government department charged or intended to be charged with the duty of or responsibility for executing or administering laws enacted by the National Assembly. Section 88 (1)(a),(b) (i) (ii).

‘’The challenge is where as in this instance, the IGP has declined, who will compel his attendance against the backdrop of the community reading of Section 89 (1) (d) and (2), on the issue compelling attendance by the President of the Senate and the Speaker of the House of Reps authorising the execution of the warrant by a member of the Nigeria Police Force or by any person.”

The Cleansing of the Judiciary