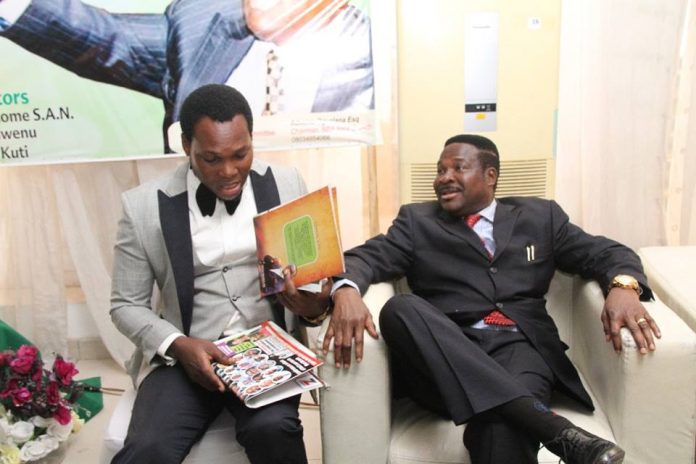 Chief Mike Ozekhome SAN’s son John Francis Ozekhome has reacted to news about the assault on his father by irate youths at the 14th Gani Fawehinmi Lecture asserting that the pepetrators were hired miscreants and thugs parading  and masking themselves as students.

John Francis also accused reporters of one sided news about the incident.

Here’s what he wrote:

My attention has been drawn to several publications circulating on social media which has the photograph of High Chief Mike Ozekhome being embarrassed by some group of hired miscreants and thugs parading and masking themselves as students. In the said publications, an impression is created that Chief Mike Ozekhome (SAN), is a lawyer that defends corrupt politicians.

Curiously, the publication does not include information that despite the futile and calculated attempts of the miscreants to prevent Ozekhome from entering the venue, Ozekhome received a standing ovation by other intellectuals, guests, Lawyers, Judges, Media representatives and patriotic Nigerians who graced the occasion, during and after his contributory Speech, as all hailed him for his unshakable stand.

The publications never mentioned that Chief Mike Ozekhome was honoured with an award on the event for his immense contribution to the success of the 14th Chief Gani Fawehinmi Annual Lecture/Symposium 2018.

I therefore wish to inform members of the public that Chief Mike Ozekhome will not relent in his fight against the oppressed and repressed. #istandwithmikeozekhome#

Meanwhile Chief Ozekhome SAN who has been celebrating the award given to him at the event  noted that he is not ready to give up the struggle to fight for the oppressed.

“I’ll always remain focused and undeterred in my fight against the oppressed and depressed.”

Chief Ozekhome was assaulted by youths who accused him of defending corrupt politicians. The event has drawn wide condemnation by many who saw the action beyond only chief Ozekhome.