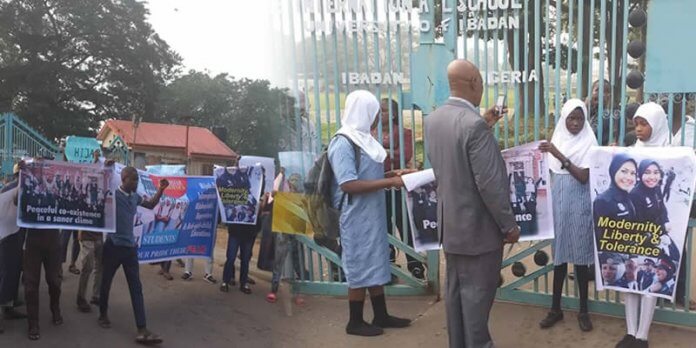 Parents of some female Muslim students of International School, Ibadan (ISI) have sued its authority for barring their children from wearing hijab on their school uniforms.

The applicants in the suit before an Oyo high court in Ibadan, are Taofeek Yekinni, Idris Badiru, Sikiru Babarinde, Muideen Akerele and 10 others.

The respondents in the suit are ISI, University of Ibadan; Phebean Olowe, the school principal, and Abideen Aderinto, deputy vice-chancellor (academics) and chairman, ISI board of governors.

In the court summon obtained by NAN, the applicants’ lawyer, Lateef Fagbemi (SAN), urged the court to declare the continuous denial of the authority of ISI to allow the female Muslim students from wearing hijab as wrongful and unconstitutional.

Fagbemi said the action of the authority of ISI violates the applicants’ right to freedom of thought, religion and right to education as contained in section 38 (1)(a) and 42(1)(a) of the constitution.

He said the locking up or humiliation of some of the applicants by the respondents or their agents as a result of the use of hijab is a violation of their fundamental human rights.

He urged the court to order perpetual injunction restraining the respondents either by themselves, agents or servants from further interfering or infringing in any manner with the applicants’ fundamental rights.

The suit has been fixed for December 21 for mention before Ladiran Akintola, a justice of the high court.