Few days ago, the legal community woke up to yet another news of a petition by a certain Mrs. Kehinde Dumoye to the President of the Nigerian Bar Association (NBA) alleging a case of Unprofessional and Unethical Practice against Paul Usoro SAN. The letter is herewith attached. 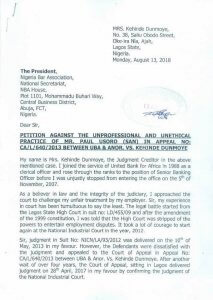 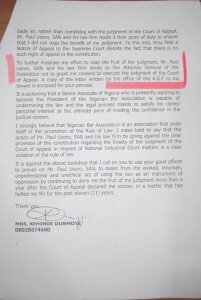 As usual political opponents saw this as one of the means of scoring some political points and have since expressed their views on the content of the petition, though one sided.

Rather than yield to unnecessary sentiments, DNL Legal and Style in its usual manner spared some moments to seek the reaction of Mr. Paul Usoro SAN and his Law Firm on the said allegation. Below are our findings:

We spoke with Mr. Paul Usoro who gave the response thus:

“What won’t they throw at me? I am not even familiar with this case and never appeared in it whether at the National Industrial Court or at the Court of Appeal. I thought ethical conduct attaches to the person & cannot be vicariously attributes to one. If I never took part in that matter or even discussed the strategy therefore with my colleagues or even the client, I don’t see how ethical issues or conduct could be attributed to me.”

“I also don’t see how the exercise of one’s constitutional right to appeal against a judgment can be said to be unethical. After all it was in the exercise of such right that the Supreme Court recently pronounced on the right of a litigant to appeal to the Court of Appeal against judgments of the NIC. Going by this Petition, that appeal was unethical! And yet, Supreme Court heard & delivered landmark judgment thereon!”

Mr. Munirudeen Liadi, a partner in the law firm of Paul Usoro & Co. expressed his displeasure at the publication which he finds highly distasteful. In his words:

“Festus Keyamo’s chambers on 23 February 2018 wrote an application for consent to garnishee UBA Account with CBN pursuant to Section 84 of the Sheriff and Civil Process Act to the Honourable Attorney General of the Federation. In the said letter, they concealed the issue of pending Appeal and motion for stay of execution pending at the Supreme Court and Court of Appeal respectfully. The Honourable Attorney General of the Federation wrote to UBA for response  by a letter dated 03 May 2018.”

“UBA briefed us to respond and by our letter dated 23 May 2018 and signed by Ime Edem-Nse, we explained what transpired and the pendency of Appeal and Motion for Stay. We learnt that the Honourable Attorney General of the Federation advised Keyamo Chambers to channel their grievances to the Court since the matter is subjudice. This is what informed the recent campaign of calumny against PU.”

Mr. Muniru also forwarded to us the letter which was written by Paul Usoro & Co on behalf of its client UBA. Same is herewith attached:

One thing is however clear in the whole of this, as of today, Paul Usoro (SAN) is the most attacked presidential aspirant in the forthcoming NBA General Election. Could that be all he needs to take over from the Brave New Bar and Put Us all First?

NBA 2020 Election: All Aspirants and Offices at a Glance