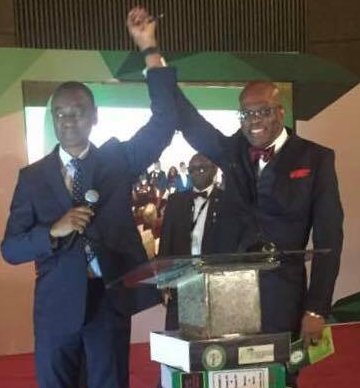 At about 11 am today 31st August,2018, Mr. Paul Usoro, SAN was sworn in as the 29th President of the Nigerian Bar Association (NBA) amidst thunderous celebration.

In a ceremony which was held at the International Conference Center Abuja, venue of the just concluded NBA Annual General Conference, the swearing in and hand over marked the end of the tenure of Mr. A.B Mahmoud led Brave New Bar and ushered in an administration that promised Nigerian Lawyers an institution that puts its members first.

At the handing over ceremony, a motion for the dissolution of the A. B. Mahmoud, SAN administration was moved by Augustine Alegeh, SAN (past President of the NBA) and seconded by the immediate past NBA Section on Business Law Chairman, Mr. Olumide Akpata.

Mr Usoro thanked  lawyers for their  support and promised to fulfill all the promises he had made during his campaigns.

EBF Endorsement of Candidate for NBA President: A Waste of Time...