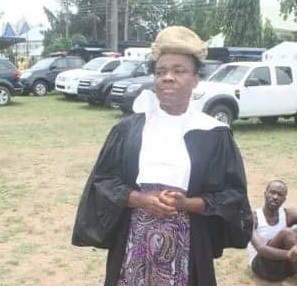 After practising for 5 years, the long arms of the law finally caught up with one Beatrice Obiageli Nnamuoh, a fake lawyer.

The 35-year-old woman was paraded alongside other suspects at the Imo State Police Command Headquarter in Owerri on Thursday, March 1.

Briefing newsmen, the Commissioner of Police, CP Chris Ezike, said the suspect from Iyiawu Village, Onitsha Anambra State but resident at Okporo Orlu, Imo State, was arrested on February, 1, after defrauding members of the public of various sums totally over N342,000.00 with the pretense of selling auction vehicles to them having severally posed as a Lawyer.

In the course of investigation, the suspect confessed that she is a fake Lawyer and have been in practice for the past five years.

A search conducted at her residence led to the recovery of lawyers Gown, Wig, Collaret, Letter headed papers and case diaries.

She will be charged to Court soon.