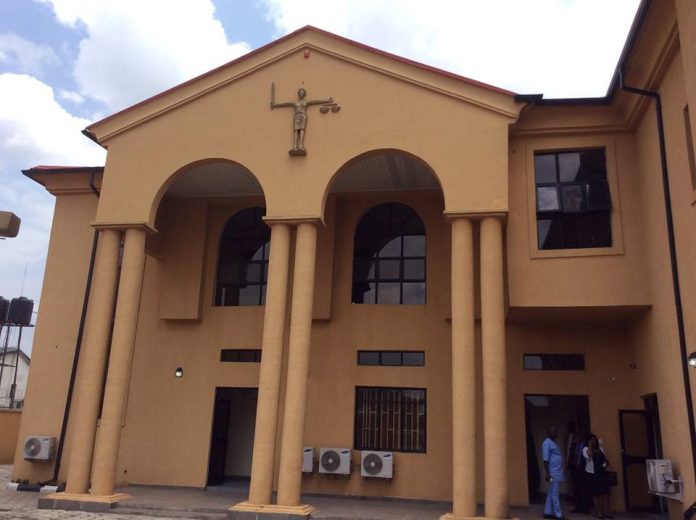 The President of the National Industrial Court of Nigeria, Hon. Justice B. A. Adejumo OFR has paid an official working visit to the NICN Rivers State, Awka in Anambra State, Owerri, Imo state and Asaba, Delta State   Judicial Division Court complex under various stages of construction.

He was accompanied on the tour by the Rivers State Attorney General, E. C. Aguma. Justice Adejumo was later conducted round the building by the Project Head, Engr. Pascal Nnandi. The facilities inspected comprises of 4 Storey Building with 4 Court Rooms, underground car park, Emergency Rooms, Clinic, Elevators and Admin block  etc. At the end of the inspection, Hon. Justice B. A. Adejumo expressed delight over the progress of work at the court complex by the contractors handling the project. At the  Owerri Court Complex which is ready for commissioning, His Lordship on Arrival was received by the three Presiding Judges of Owerri Judicial Division; Hon. Justice O.O. Arowosegbe, Hon. Justice I. S. Galadima and Hon. Justice S.H. Danjidda; the Chief Registrar, Olurotimi W. Daudu, top principal officers and staff.

At the end of the inspection, Hon. Justice B. A. Adejumo expressed satisfaction over the completion of work at the newly built court complex and declared that the court will be commission few weeks to come.

At Awka in Anambra State, His Lordship was received by the Presiding Judge, Hon. Justice I. O. Targema who took him on tour to access all facilities being put in place.

His Lordship, Justice Adejumo stated that better working conditions to ease judicial process will continue to be his topmost priority.

I Did Not Abduct Chibok Girls To USA – Human Rights...