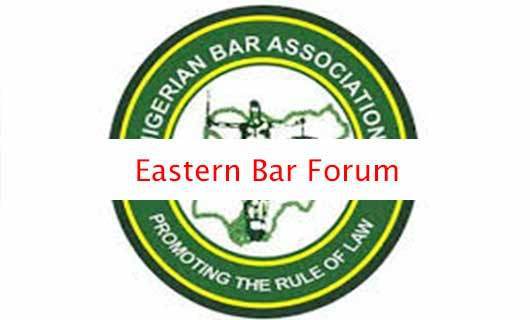 Following the recently concluded NBA National Election, the Eastern Bar Forum (EBF) has convened an Emergency Meeting of the Forum to evaluate the electoral process.

The Notice of the Emergency Meeting which was signed by the Publicity Secretary of the Forum, Mr. George Fortune Igbikikuno was issued on behalf of the His Excellency, the Governor of the Eastern Bar Forum, Chief Arthur Elvis Chukwu, ACIArb., KSJI and the Governing Council

The notice calls on all the Governing Council and Elders of the EBF, National Officers, All adopted candidates of the EBF; whether victorious at the polls or not, current and immediate past learned Chairmen of branches in the EBF, past Governors and Secretaries of the EBF, Chief Alex Mouka, Esq., as well as the Chairman, EBF ICT Committee to attend the crucial meeting scheduled as follows:

Igbikikuno also requested members to come along with any incontrovertible evidence concerning the 2018 NBA General Election that will immensely assist the EBF cause.

It would be recalled that Chief Arthur Obi Okafor SAN who was adopted by EBF as its NBA presidential candidate lost at the polls to Mr. Paul Usoro SAN by a very narrow margin.