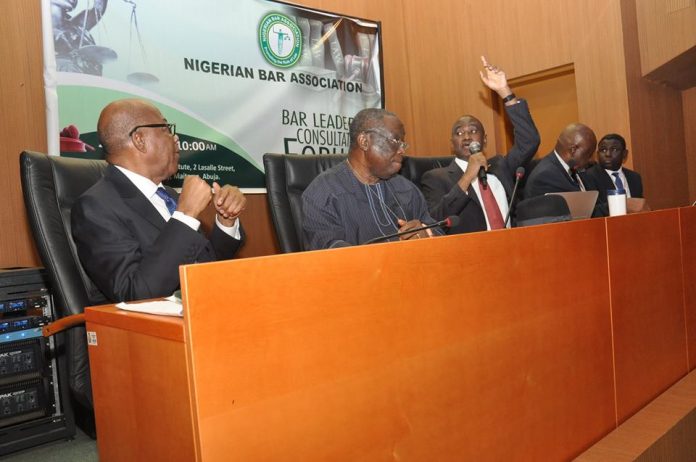 The Body of Senior Advocates of Nigeria (BOSAN) has appointed Professor Taiwo Osipitan SAN as the Chairman of the Committee set up by the Body to review the draft Legal Profession Regulation Bill presented by the Nigerian Bar Association (NBA) President Abubakar Balarabe Mahmoud SAN, OON, FCIArb to the BOSAN.

The President of the NBA presented the draft bill during the discussion on the on-going reform initiatives of the Nigerian Bar Association by the distinguished Body at a meeting on Saturday 14 April 2018 at the Conference Hall of the Nigerian Law School (Lagos Campus).

The NBA President attended the BOSAN meeting with the Executive Director of the NBA; Mrs. Ramatu Umar Bako, the Policy and Strategic Planning Adviser to the NBA President; Ms. Zainab Animashaun and a representative of KPMG Advisory Services which was appointed by the NBA in 2017 to conduct a Diagnostic Review of the NBA’s Corporate Governance and Financial Control Processes. The KPMG representative; Ms. Folashade Owoeye, made a presentation of its Report on the NBA, which included detailed findings from the KPMG’s three (3) month internal assessment of the Association and recommendations on the reform of the NBA’s administrative structure.

Also presented to BOSAN by the NBA President was an executive summary of the NBA’s reform initiatives where he provided an overview of the current state of the Nigerian Legal Profession, and expatiated on the NBA Reform Strategy which focuses on the promotion of reforms in four crucial areas: the regulation of the legal profession, representation of NBA members, re-engineering of the NBA’s administrative structure, and in public interest interventions by the Nigerian Bar.

He highlighted the NBA’s reform initiatives which include:

the NBA’s Digitisation of Continuing Legal Education Initiative; the Diagnostic Review of the NBA by KPMG Advisory Services;

NBA engagements with International Development Partners and Bar Associations; and concluded his presentation with the next steps on the NBA reform process.

The Presentation received a standing ovation by BOSAN members who praised the effort of the President at reforming the Nigerian Legal Profession. BOSAN also endorsed the Report of KPMG Advisory Services on the Diagnostic Review of the Corporate Governance and Financial Control Processes of the Nigerian Bar Association, and urged the President to ensure that the recommendations proposed by the KPMG in its report were implemented before the completion of the tenure of the current NBA administration.

The Body then set up a Committee to be chaired by Professor Taiwo Osipitan and Deacon Dele Adesina as Alternate Chair, with a mandate to review the draft Legal Profession Regulation Bill prepared by the NBA LPRRC and forward its recommendations on the Bill to the NBA for its harmonization into the final draft Bill, which is due to be presented to the Senate on May 1, 2018.

The NBA President’s presentation to the BOSAN is part of the stakeholder engagement plan on the NBA reform initiatives by the current leadership of the Association, that aims to ensure all relevant stakeholders which include; the Body of Benchers, Bar Leaders Forum, Section on Legal Practice, Section on Business Law, Section on Public Interest and Development Law, Specialized Forums (Young Lawyers Forum, Lawyers in the Media Forum, Military Law Forum, Women in Law Forum, Lawyers in the Legislature Forum, Law Officers Association of Nigeria), Special Interest Lawyer’s Groups (Lawyers with Disabilities, Regional Associations, Practice Area Associations, Religious Associations), International Development Partners and International Bar Associations; are duly sensitized and widely consulted on the NBA reforms process.