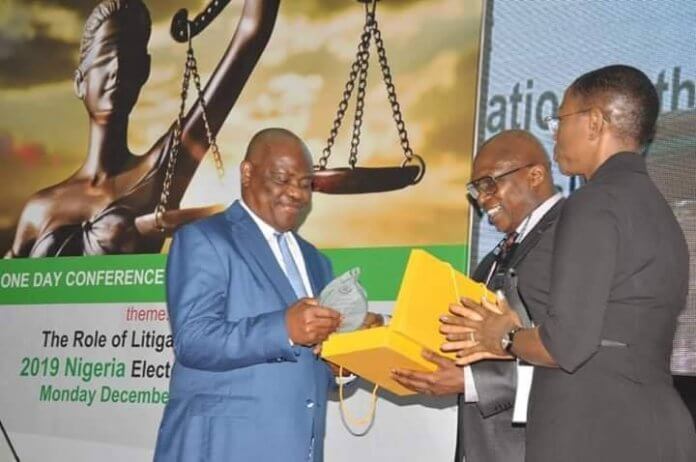 Rivers State Governor, Nyesom Ezenwo Wike has declared that the reliance on litigation in the resolution of electoral issues is symptomatic of the failure of the electoral process.

Delivering a keynote address at the conference of the Democratic Process and Electoral Litigation Committee of the Section on Legal Practice, at the NBA House on Monday, Governor Wike said that litigation remains a powerful tool for the assertion of political rights.

He said: “The Electoral process is a serious matter of concern to the citizenry. I regret that INEC and security agencies negatively affect the electoral process.

“Post-election matters for redress maybe symptomatic of the prevalence of perceived grievances with the electoral process.

“The way to forestall rampant electoral litigation is not by constricting the right of access to the court as being advocated in some quarters, but rather strengthen the Democratic institutions to engender transparency and respect for the rule of law in the Democratic Process.”

The governor urged lawyers to up their game in using litigation to enhance credible electoral process.

Governor Wike said that litigation has made it possible for the political parties to account for their actions.

He said that the impartiality of the security agencies especially the police is needed for credible elections in 2019. According to him, the partisanship of the police ruined the credibility of the Osun Polls.

He urged civil service organizations to prevail on INEC and security agencies to be impartial.

He said: “It is our collective responsibility to protect the nation’s democracy. I urge Nigerians to be vigilant and seek credible polls.”

Chairman of Democratic Process and Electoral Litigation Committee, Chief Ferdinand Orbih ( SAN) lauded the Rivers State Governor for his commitment to electoral reforms through the support for NBA programmes.

Bayelsa State Chief Judge, Justice Kate Abiri said that the litigation can be minimised where the elections are free and fair.

The event attracted prominent lawyers from across the country including the Governor of Ondo State, Chief Oluwarotimi Akeredolu (SAN).

Chief Mike Ozekhome SAN Honoured With Title Of Ikemba 1 in...