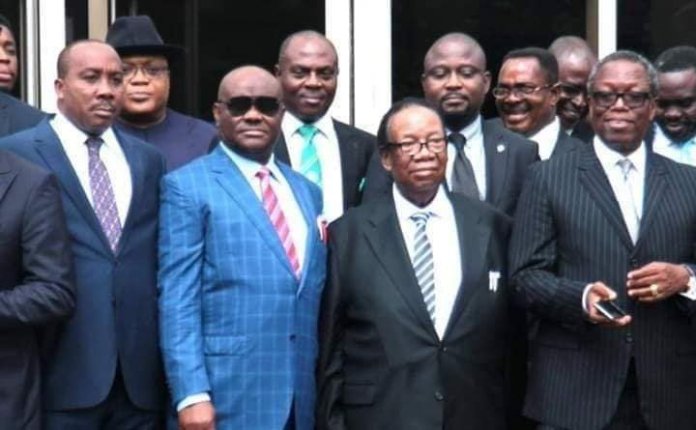 The Branches of the Nigerian Bar Association (NBA) in Rivers State have described the Governor Nyesom Wike era as the years of abundance and growth for the legal profession in the state.

Speaking during a courtesy visit by leaders of the NBA in Rivers State to the Government House Port Harcourt on friday , Chairman of the NBA Port Harcourt Branch, Mr Sylvester Adaka noted that the Justice Sector has hadits best run under the leadership of Governor Wike.

He said: “The justice sector in Rivers State has never had it so good . The tenure of Governor Wike will go down in history as the years of abundance for the Justice Sector”.

He thanked the Rivers State Governor for the projects and programmes in the Justice Sector, which have improved law practice.

“Under the leadership of Governor Wike, justice sector has become more vibrant. Only recently, three lawyers were elevated to the position of Senior Advocate of Nigeria in the state “, he said.

The Rivers lawyers appealed to the State Government for the allocation of land for the establishment of a Lawyers Housing Scheme.

They also requested for the support of the State Government in the construction of NBA Secretariat in other branches in the state.

Responding, Rivers State Governor, Nyesom Ezenwo Wike assured lawyers in the state that his administration will continue to promote the rule of law.

He assured lawyers that his administration will sustain cooperation with them to avert a situation where the justice sector is compromised.

Governor Wike urged lawyers to speak out against societal ills for the protection of the nation’s democracy and the rule of law.

The announced the donation of buses to three new NBA Branches in Rivers State and support for other branches of the NBA for the construction of secretariats.