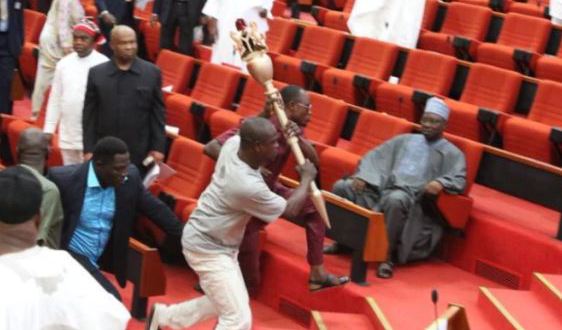 Former Nigerian Bar Association (NBA) President Wole Olanipekun and a constitutional lawyer Sebastian Hon, both SANs, called for the prosecution of all those involved.

Olanipekun said: “It’s certainly a dangerous development, which is very threatening, not just to our evolving democracy but also to the entirety of the nation. To me, it’s akin to treason. It makes us a laughing stock in the comity of democratic nations worldwide.

“We shouldn’t allow history to repeat itself on us this time around, because this was how the infamous ‘fire on the mountain’ episode started in the House of Assembly of the defunct Western region.

“Those behind this heinous and dastardly act must be apprehended and brought to book, but due process of law should also be followed. They shouldn’t be condemned without hearing, as this is the fashion in Nigeria now.”

Hon, a renowned legal author, said those who stormed the Senate and removed the mace must be prosecuted.

“This is a very sad development for our democracy. It seems the government at the centre has lost control, or it’s fast losing control. All Nigerians of good will must rise up to defend this democracy.

“The suspended senator and his backers must be prosecuted without delay. This is simply intolerable. I condemn this dastardly act without mincing words,” Hon said.

Ali said the development showed the kind of leaders Nigeria has.

“If it’s true that a senator led hoodlums to steal the mace, which is the authority of the Senate, then our collective resolve to live as decent and civilised citizens is undermined! It speaks volume for the quality of leaders our system threw up in 2015!” Ali said.

Ozekhome described incident as a “crude and barbaric” invasion of the hallowed Senate chambers, saying it was the civilian equivalent of a military coup.

According to him, no democracy was complete without an independent legislature, in line with the principle of separation of powers, so as to prevent dictatorship.

Ozekhome said Omo-Agege had no business in the Senate having been suspended, adding that the mace that was taken away was “a sacrosanct symbol of authority, integrity, dignity and power of lawmaking in the Senate.”

On why he suspects executive collusion, he said: “For these hoodlums to have taken the mace out of the floor of the chamber into their car, in the presence of policemen and other security agencies that guard the National Assembly, it is simply a case of the witch crying last night and the child dying this morning, and we know who killed the child. I therefore suspect serious government conspiratorial collaboration.”

Ozekhome said Omo-Agege, who went to court to challenge his suspension, should have allowed the judicial process to run its full course, but resorted to self-help.

“This is unacceptable. It is a sad day for democracy. It is sad day for the Senate and National Assembly and for Nigeria. It shows that we’re not ready to deepen the tenets of democracy,” he said, adding that Omo-Agege could not claim that his constituency was denied of representation, having subscribed to the Rules of the Senate and was bound by its decisions.

“I condemn what happened in the Senate. I condemn the intrusion, and the apparent half-powerlessness of the National Assembly security in guarding against this national embarrassment and national shame on our country,” Ozekhome added.

“The political class must get their acts together and must consciously avoid any action that will aid the fifth columnists to wipe out the little progress we have recorded in our democratic journey so far,” the SAN said.

Ngige said Omo-Agege, despite the circumstances, was presumed innocent until proven otherwise. He urged the National Assembly to strengthen its security.

“The leadership of the National Assembly should beef up its security and investigate why the thugs had easy access to the premises and to the hallowed chambers. All those involved should be severely dealt with in accordance with rule of law. The price of liberty is eternal vigilance. National Assembly members should be vigilant,” he said.

Akinseye-George believes that provocation could make someone to lose his sense of decency and self-control.

“The suspended senator must have acted under the heat of extreme provocation. Authorities should avoid provoking people. This is the kind of response you get when people are provoked. They act in the heat of passion only to regret their actions later. He may also have other issues which are not known to innocent observers.

“But, we must all avoid actions which can undermine democracy. Legislature is the epitome of democracy. Its independence must be respected and preserved at all times,” the professor of Law said.