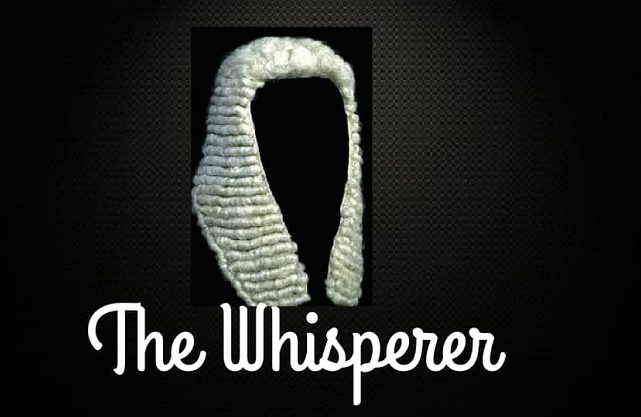 It is a strange thing to see a judge’s naked head.

But you can watch The Whisperer’s shiny smooth crown almost every time His Lordship’s court is in session.

The electricity is usually steady, so the white neon lights – several metres away in the high ceiling – don’t often flicker in this large Lagos courtroom.

They beam down from 22 out of 32 uneven rows of long fluorescent lamps, on the black or white heads in different sections of the hall.

There must be other head colours, of course, women in headgear, for instance, but I hardly ever notice.

Sometimes, I imagine that the registrars, the unrobed or partly robed counsel, the lookers-on in the gallery and I, are on the same team: Black Heads.

And that The Whisperer is our captain.

White Heads, on the other hand – fully robed counsel spoting white, silver or golden wigs – are our opponents.

Unlike in almost every other courtroom in the country, Black Heads rule here.

You can find us on the Bench, the mini ‘registry’, the right, left and central Bar, the witness stand, the dock and the gallery.

Unlike White Heads – goody two shoes – we do not discriminate. Learned and unlearned, all are welcome in our ranks.

Our persuasive power is also very strong, so, we have a high conversion rate among White Heads.

Most of the time, counsel enter The Whisperer’s courtroom as White Heads, but join the winning team along the way.

First timers among them must mentally recoil in astonishment at the unusually unconventional dress code.

But, whatever their sentiments, you can bet your bottom dollar that – senior, mid-level or junior counsel – they will eventually take off their gowns and, or wigs, and place it beside their files on the long desk.

White Heads are sprinkled only around the Bar. But what they lack in numbers, they gain in their insulation from the great magic of the neon.

All but the third are regular features of a courtroom, at least in Lagos.

Some days ago, as I sat out a fairly long ruling by The Whisperer, the magic connived with my tired eyes to create a lunar mirage on his hairless crown.

The longer I stared, half asleep, half awake, the more it seemed a bright moon had taken residence on it.

But this moon was itinerant: it moved with the movement and stilled with the stillness of The Whisperer’s head.

Whenever he looked up from his laptop, it left the centre of his head and raced to just above his forehead. If he bent over the laptop, the moon retraced its steps.

This continued the longer The Whisperer read in that calm, dignified manner of his.

He did not seem to be aware, but he was barely audible, despite speaking into the microphone.

This seemed to happen only when  he read a ruling or judgment. His regular voice was audible enough, but whenever he read it came out barely above a whisper.

As he read, counsel came and went, taking a bow as they did so. But not everyone.

The fair, slim, uniformed policeman, who keeps his trousers high on his waist was in his chair at the entrance when the thick wooden double doors swung open.

He avoided the Bar on the right, turned left, passed the central Bar and the gallery, without a glance to the right or left.

Even if he had worn a wig and gown, I could have said he was a Black Head at heart: he took a seat on a wall bench near the left Bar, without bowing before the judge. Then he brought out his phone and began to scroll.

Apart from reading sotto voce, there was something else unusual about The Whisperer’s voice.

It dawned on me gradually: his voice was totally without inflection; it neither rose nor fell.

The good thing was that it meant he did not give anything away until he was done.

Conversely, nobody could tell when he was rounding up.

So, when The Whisperer finally ended his ruling, it caught us all unawares.

Nearly two seconds passed before two White Heads on separate benches in the central gallery, realised he was done.

“As the court pleases,” they finally said.

It was a routine ruling, nothing in there for me. I got up, gave a bow and abandoned my team. Echoes From the Courtroom: The Ambush Letter of Adjournment