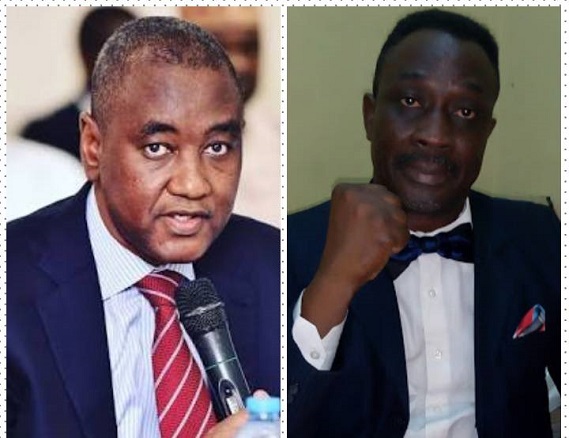 While the National President hinges his view on what is fit and proper for a legal practitioner, the Ikeja Branch Chairman is more for what would effectively achieve result.

It all started at the National Executive Committee (NEC) meeting of the NBA held in March 2018, when the Chairman of Ikeja NBA Branch pointed out to the NEC that the internal reforms and reorganization being planned by the National Leadership of the bar will prove “useless” if the Association neglect to effectively intervene in “grave” problems of the society.

In the words of the Ikeja NBA Chairman; “Quoting the ancient Romans, I asserted  ‘ The Laws Keep Silent, When the Guns Boom’. I illustrated my point with the very unsafe and notorious terrorist infested swathes of the Sambisa Forest   wondering  what court could hold there and which counsel,  no matter how sage, could display any legal prowess in that hell?”

The above submission was faulted by the National President who considered same a denigration of the effort of the present leadership to reposition the NBA by the various internal reforms and national engagements being embarked upon.

Sometime in March, 2018,  the Lagos State Government attempted to introduce a new Land Use Charge Regime which increased the various land use charges by over 200%. This drew the irks of the Tiger bar as they stood vehemently in opposition to the introduction by mobilizing its members and the general public to engage in protest across the state.  It is on record that Lagos State Government in an attempt to calm the pressure announced a reduction in the land use charges. This was rejected by the Ikeja NBA Branch who insisted that the State must return to old land use charges.

At some point during the above engagement between the NBA branch and the Lagos State Government, the NBA President demanded a situation report from the Chairman of the Ikeja Branch. A demand many saw as an indication of the President’s  disapproval of the protest by the Ikeja Branch.

Confirming the above insinuation, the NBA President at the just concluded NBA NEC meeting which held in Kano, expressly condemned not only the style of social activism engaged by the Ikeja Branch of the NBA but also the branding of the Branch as “Tiger Bar”

According to the President, “the Tiger Branding of the IKEJA Bar is unacceptable.” He noted that the NBA is not akin to trade, labour or student unionism or a civil society and must not carry on its activities like those.

Responding to the above admonition by the National President, the Chairman of the Ikeja Branch of the NBA has this to say:

“I most respectfully disagree with the NBA President’s view. According to the President, the NBA, is strictly   a lawyers professional body and as such cannot be an engine or tool or platform for social activism. I understand the president’s comments as an admonition and a belief that demonstrations, protests, marches, pamphleteering, holding of rallies gets and all other forms of pressure tactics and interventions are activities unsuitable for legal practitioners in their capacity as legal practitioners and as such conduct incompatible with their status and standing as legal practitioners.”

“If my understanding of the President’s position is what he actually meant, I hereby and forthwith confirm my ardent disagreement with same for the following reasons;

“The President’s position assumes that dissent via physical expressions, no matter how peaceful, orderly and disciplined is untoward for a Lawyer for it lowers him in the eyes of others.  More or less saying that Gentlemen don’t carry placards or demonstrate or vocalize their disagreement in manners on the lane if agitation.

“To me, such views reflect nothing more than a wrong , aristocratic, feudal philosophy calculated to protect the interests of the privileged class and position by restricting vigorous articulation of contrary views to a status quo.