Home Court room news To Become Binding, Collective Agreement Must be Adopted as Part of Employment... 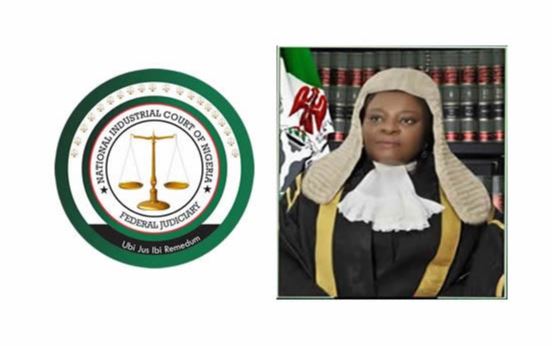 His Lordship, Hon. Justice M. N. Esowe of the National Industrial Court of Nigeria, sitting in Uyo, Akwa Ibom State on Tuesday 30th October 2018 in a judgment held that Collective Agreement is a gentleman’s agreement which does not bind the parties except it is incorporated into the contract of employment or adopted as part of the terms of the employment. The court ordered Union Bank of Nigeria to refund NKEREUWEN D. AKPABIO the sum of N158,988.76 debited twice from the account of the Claimant, and the sum of N100,000.00 as cost of litigation.

By an amended statement of facts dated and filed 18th January 2018, the Claimant sought against the defendant among others;

A DECLARATION by the Court that the Defendant was wrong to breach its agreed contract terms with the Claimant/employee. In view of this breach, the Claimant hereby requests the Defendant to pay all salaries, allowances and other benefits due for 7 unexpired years in his service contract which amounts to 35.7million

It is the case of the Claimant that in 1983 when he was employed, he was contracted to work for 35 years or retire on attaining the age of 60 years (whichever came first). However, in 2014 when his employment was terminated, he still had 7 years left to complete before retirement. Besides the fact that Claimant claims he is entitled to the salary of the uncompleted 7 years, he also states that he is entitled to 16 weeks salary of every year he worked as his terminal benefit as provided in the collective agreement between the Association of Senior Staff of Bank and Financial Institution employees and the Defendant.

The Claimant who was employed by the Defendant on June 27th, 1983 had his employment terminated in 2014 vide a letter dated 28th November 2014 titled “Withdrawal of Services”. In the said instrument terminating his appointment, his terminal benefit was calculated to be N3,664,583.57 (Three Million Six Hundred and Sixty-Four Thousand Five Hundred and Eighty-Three Naira Fifty Seven Kobo). With the sum of N158,998.76 deducted from his terminal benefit as his indebtedness to the Defendant, his balance was placed at N3,505,584.57.

On their part, Defendant Counsel stated that the Defendant did not enter any contract with the Claimant that the employment was master-servant which can be terminated by either party on giving adequate notice.

The Defendant, while denying any liability to the Claimant asks the Court to dismiss this case.

In Defendant’s final written address, Learned Counsel asked Whether the Defendant breached its contract of employment with the Claimant to entitle him to the reliefs sought in this suit. Whether, in the circumstances of this suit, the collective agreement relied upon by the Claimant could avail him in this case.

Learned Counsel submitted further that the claim of the Claimant that he is entitled to all his salaries and entitlements until the time he would have retired is a fallacy because there is no evidence on record that the Claimant can of right remain in the employment of the Defendant until retirement.

Learned Counsel to the claimant submitted further that Claimant is entitled to the sum of N158,998.76 that was deducted twice from his account and the sum of N20,000,000.00 (Twenty Million Naira) as damages. He, therefore, urged the Court to grant the claim of the Claimant.

After reviewing the argument of both parties, the Court Presided by Hon. Justice M. N. Esowe expressed thus;

“Collective agreement, by its very nature, is a gentleman’s agreement which binds the gentleman on his honour. As such, no collective agreement entered by the union of employers on one side and union of employees on the other side is enforceable against a particular employer or employee unless it is expressly stated or incorporated in the employment contract between the particular employer and employee.

“Incidentally, the Claimant did not prove by any scintilla of evidence how the collective agreement, forms part of his terms of employment or how it was incorporated into his employment to enable him benefit from same.

“From the case of the Claimant herein, the Claimant has failed to establish that his case falls under any of the exceptions. As such the Claimant is not entitled to plead or rely on the provisions of the collective agreement, and I so hold.” Justice Esowe Stated.

His Lordship dismissed among others, the request made by the claimant to ordered defendant to pay all salaries, allowances and other benefits due for 7 unexpired years in his service contract which amounts to 35.7million for lacking merit.

The court also held that the defendant was wrong to debit the Claimant’s loan twice, Ordered Defendant to refund the sum of N158,988.76 debited twice from the account of the Claimant, and the sum of N100,000.00 (One Hundred Thousand Naira) as the cost of litigation.

Court Orders Service of Charge on Ex-Customs Boss Dikko through His...