Home Opinions “Transitions” and “Transformations” 2018 NBA-AGC: Thinking Through the mind of TCCP 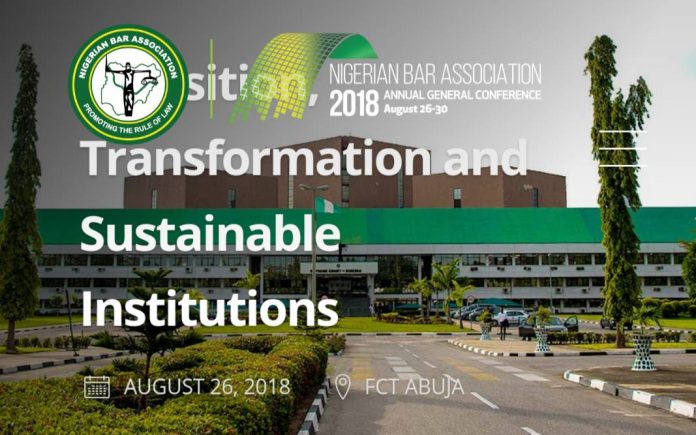 My first reaction to the theme of the 2018 NBA Conference was laughter. When I first heard the theme, I said it was a joke. Then I saw it on the website. Like seriously? I quietly suggested to myself that the organizers have gone formally to seek permission from the inventor of these words before brandishing them. I mean, for crying out, this is someone’s intellectual property. Those words have attained linguistic threshold and anyone who uses them in their invented combinations has only one source as origin. Surely, you can’t just go transition, transformation, without having been inspired by some very intelligent phrase formation experts. Ok let me just keep quiet before some people start reading something else.

So, we are going to Abuja to have a “Transition” and “Transformation” Conference. It is going to be the conference just after the most popular, most expensive and most everything NBA Conference. The conference that gave thousands of lawyers a “tablet” (don’t mind that some never cured any known legal ailment and some stopped working before the end of the conference). A conference that made it possible for lawyers to collect all their conference materials before the commencement of the conference (again never mind that a few never did till after the conference). A conference that brought the Zain Asha of this world to sit with the Vice President to discuss a topic I am not sure is anything but ordinary. A conference where all conferees had breakfast and lunch prepared by an above average caterer of Lagos. A conference that provided mobility to and from the venue of the conference to conferees. A conference generally adjudged “world class” (even if it is just the Nigerian version of world class). The Lagos 2017 conference was indeed very exciting. I had fun following the intrigues as they unfolded. I could not forget in a hurry the dust raised by the sudden closure, reopening, then closure and then reopening, then final closure of the early bird registration window far before the slated date (I mean everyone wanted a tablet). Yours truly was probably the first to register for this 2018 conference, I didn’t want to hear early bird ended earlier. I can’t shout biko. In summary and at the end of it all, the conference became a reference point for how Nigeria and Nigerians can actually measure up or almost measure up to the standard of the world bests.

ALSO READ   As Olumide Akpata Climbs the Popularity Ladder, Any Lesson From Mazi?

Enough of the past Conference and back to the present concern. You see, the worst thing that can happen to a man is to become retrogressive. A standard has been set by the 2017 AGC TCCP. If not for anything, for the sake of posterity, maintaining this standard must be the worst case scenario at the forth coming 58th NBA Conference. It would be early to preempt or judge the performance of the new TCCP, they have only just opened the portals. We continue to watch. My only observation so far would be on the fact that the resignation of Prof. Ajayi SAN was shrouded, however, we have an equally global looking TCCP Chairman in the person of Mr. George Etomi. It is also obvious that the enthusiasm for this year’s conference is a little bit low, I would want to assume and attribute this to the focus on the upcoming election. I mean, I know that many will eventually not attend the conference. Make una dey watch. They will be busy filing papers in court and fighting on Social Media like my brother ACP Sogunle pointed out. So, it is understandable that only those of us sitting on the fence have boldly paid for our conference. Whoever win, we all die here! But just before I go, let me remind you brethren politicians and political thugs, the early bird window closes 1st July. Beeni! July 1. If you like sit down there, there is only one slot for the office of the President of the NBA thankfully. Your candidates are not going to pay for your late registration if they didn’t win, this one is not practicing fee o. Just advise yourself and don’t say I didn’t warn you!

All said, it is hoped that interest would pick up as soon as the election is contested and won. While we await things to get all exciting again, may I remind the George Etomi led TCCP that the worst that this conference can offer is the standard of the last year’s conference. I have said this before. This is being a little unambitious, otherwise, I would be demanding that the TCCP focus on improving on all the few lapses witnessed at the 57th Conference to ensure that the 58th conference surpasses the achievements of the 57th Conference.

Ten Immediate Benefits of Having a Legal Department in Each Local...

Contempt of Court: Why Federal High Court is Right on Rivers...