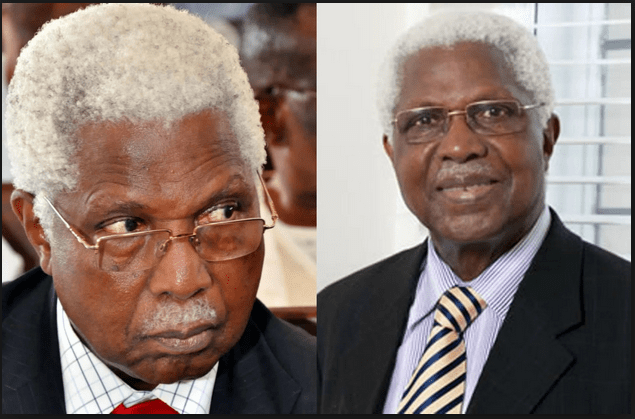 I join millions of fellow Nigerians in mourning the passing of an Elder Statesman, Patriot, Scholar, Politician, First elected Vice President of the Federal Republic of Nigeria and above all a perfect gentleman, His Excellency, Dr Chief Alexander Ifeanyichukwu Ekwueme. His remains is being committed to mother earth today in his hometown, Oko,Orunba North Local Government Area of Anambra State.

I pay my condolences to his wife, Aunty Beatrice, all other members of the family, the people of Oko and indeed to Nigerians generally. By his death, Nigeria has evidently suffered (permit the cliché) a most irreplaceable loss.

The circumstances which brought me close to him arose from my contest in August 1990 for the office of General Secretary (National) of the Nigerian Bar Association (NBA).

The story will not be complete though if I do not, before proceeding, acknowledge with enduring gratitude, the particular contributions in the same matter of two other supremely eminent Nigerians who are now also of blessed memory; His Royal Majesty, Omo n’ Oba n’ Edo,Uku Akpolokpolo Erediauwa I (The Oba of Benin);Chief Philip Umeadi SAN famously of Onitsha branch and once the Vice Presidential running-mate of the late Chief Obafemi Awolowo SAN in the 1979 elections.

To me, Dr Ekwueme was simply Uncle Alex. The familiarity arose only in 1990 after he and his wife Aunty Beatrice opened to me the doors of their country home in Oko where they hosted me for three days.
I had first met him during his first term (1979-1983) as Vice President of the Federal Republic of Nigeria through my brother Prince Folagbade Olateru-Olagbegi lecturer at the Nigerian law school as he then was (now HRM Oba Dr D.V.F Olateru-Olagbegi III, Olowo of Owo). My brother was appointed by his excellency Alhaji Shehu Shagari, then President of the Federal Republic of Nigeria as Legal adviser to the Vice President.

They enjoyed a very warm and cordial relationship which brought members of both families together. The relationship transcended the period of their official relationships. It was against this background that in 1990 in the run-up to the election, I mentioned rather casually to Uncle Alex that I was contesting the election for the office of N.B.A General-Secretary and would be visiting all the big branches in the Eastern states including Enugu, Aba, Owerri, Onitsha, Enugu, Calabar and Port Harcourt. I had already done the Northern and Western states.
Straight away, Uncle Alex offered me his country home in Oko, Anambra State as a hub for the coverage of my tours to as many branches in the East as possible. I was very honoured by the kind gesture.

Uncle Alex personally went round with me and mentioned me in glowing terms to numerous senior members of the Bar in those states. At the home front, he and Aunty Beatrice spoilt me silly. It was an unforgettable stay

I arrived Benin for the conference a few days before it opened. Naturally, I went to the Palace to pay my respect to the Oba and seek his blessings. I was ushered into his majestic presence and introduced. I was also at that time the Hon General-Secretary of the Island Club Lagos.

His Royal Majesty was one of the club’s Patrons and had a few years before then donated a trophy to the club for lawn tennis competition. In the course of our conversation, His Royal Majesty inquired from me who won the Trophy that he donated. I was delighted and honoured to let him know that I was the winner and holder of that trophy. “Well”, responded His Majesty “as you won that Trophy, you will also win the Trophy for the office of NBA General-Secretary”. I quickly claimed the blessings.

His Majesty then sent emissaries to senior legal practitioners in his domain to plead my cause and ensure my victory. I thus had the testimonial of two eminent and distinguished fathers of the land. Notwithstanding the high hopes, I lost the election.

In a return match the following year between the same candidates at the 1991 Owerri conference, I secured a famous victory defeating the incumbent General Secretary. We were and remain good friends. I still hold fond memories of Concorde Hotel Owerri, the venue of the said 1991 conference.

Chief Umeadi was in the forefront of those who urged me to contest the 1991 election rather than wait until 1992. He rallied round numerous Bar Leaders including Chief L.M.E Ezeofor of Enugu branch to work towards my election. But for them, I would have waited till 1992.

It turned out therefore that the prayers and supplications of Uncle Alex and the Oba of Benin were answered emphatically not in the year of their making but in the following year.​​​​​​​​​​​​​​​​​​​This was in fulfilment of the Yoruba adage “ Oro agba bi o se l’aro,a se l’ale “which translates to “the words and prophecy of an elder will surely come to pass; if not in the morning then in the evening”.

I found Uncle Alex to be a man of almost limitless knowledge in subjects beyond Architecture and Law, taking in History, Economics and politics. He had a very analytical mind and an arresting voice that held his audience spell-bound. He was, I think, the earliest proponent of a restructured Nigeria along six geopolitical lines, a proposition that has over the years won converts amongst many brilliant minds in several parts of Nigeria
Uncle Alex did not belong to the league of selfish opportunistic politicians that abound in Nigeria.

He belonged to a class of rare-breed politicians. He was selfless in service. He gave profound thoughts to the resolution of the contradiction that is called Nigeria. He extended hands of fellowship to fellow Nigerians in all parts of the country. His biographers will no doubt chronicle his many publications on the National discourse and the various national committees and constitutional conferences that he served in much more than this piece can do.

Uncle Alex had no equal in terms of integrity, scholarship, intellect, professionalism, nationalism and in his desire for a great Nigeria where equity and justice reign supreme.

He was a founding member of the Peoples Democratic Party. He sought the nomination of the party and was clearly one of the most qualified candidates for the office of President ever. He did not get it, but notwithstanding that he was schemed out of the race, he remained in the party when many other Nigerians of his political weight (but not equal integrity) would have migrated elsewhere to seek the realisation of their political ambition. Even when it became a stigma to be identified with the party, he remained there.

ALSO READ   "Giving Advice is a Useless Exercise": My Moments with Prof A. Toriola Oyewo, Academic Colossus and SAN Designate 2021

Obviously, in later life he was hugely disappointed at what his party had become as he had become disappointed that Nigeria remained a Nation of caged people and un-realised aspirations. At this time when Nigeria is at a crossroad, his death is quite sorrowful. He did not live to see a restructured Nigeria of his dream. The consolation though is that by dying now, he has been saved from the emerging fait accompli of 2019. We will never know how Uncle Alex would have related to the touted “Third Force”.

Before I am done, I must mention that Uncle Alex possessed great wit; he was very humorous. On one occasion, on one of our trips, we had travelled to Enugu. On our way back to Oko we stopped at Nike Lake Hotel Enugu for lunch. It was in August. At the restaurant, Uncle Alex settled for a pounded yam dish; I followed suit. Aunty Beatrice opted for a rice dish. She then reminded Uncle Alex that under Oko tradition, it was not yet time in the year to eat new yams. We practice a similar tradition in Owo. Uncle Alex retorted, “when you are in Rome, you do as the Romans do.

In Oko, I am bound by that tradition; here in Enugu, I am not bound by it”. We all laughed. That clinched the argument and saved our pounded yam lunch.
Uncle Alex was honoured by the Olowo in 2009 with the traditional title of Obanuwa of Owo Land.

I acknowledge the kind contribution of these three great people to my life development at a stage. They are gone to the great beyond but have left indelible prints in the sands of time
Adieu Uncle Alex.
May the souls of all the faithful departed through the mercy of God rest in perfect peace, Amen.