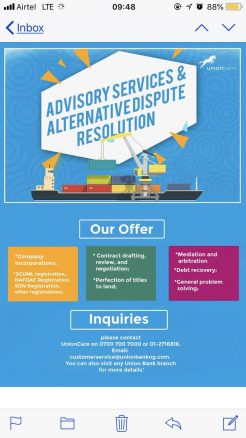 The above announcement did not go down well with legal practitioners who saw that as an infraction into the noble profession.

In a quick reaction, Union Bank has explained that the advertised legal services would be handled by a law firm known as Amber Solicitors.

In a series of tweets, Lawyers have continued to express dissatisfaction over this strange development.

View the tweets below:

The in-house lawyers working for them are the problems.

I actually think the CAC should be called into this.This is an over-reach & acting beyond their objects. Or when did financial institutions become legal advisers to the general public?

The lawyers who are doing this for the company are the real problem of the legal profession. You don’t need any law to tell you the side effects of this