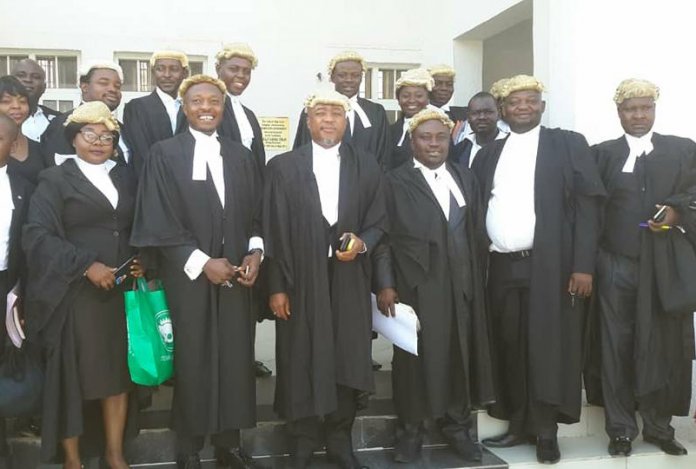 Legal Practitioners and members of the Nigerian Bar Association (NBA) Jalingo Branch were at the Federal High Court, Taraba State to represent one of their own N.A Dodo Esq. in a Fundamental Right Enforcement action he filed against the Nigerian Police for unlawfully assaulting and detaining him.

The lawyers who numbered about thirteen all worked together to prepare the Applicant’s processes as well as appeared in court for the Applicant in the suit wherein he is claiming amongst other reliefs as follows:

A Declaration that the treatment meted out to the Applicant constitute a flagrant disregard and willful violation of the inalienable right of the Applicant to the dignity of his person jealously preserved and stoutly protected under Section 34 of the 1999 Constitution of the Federal Republic of Nigeria as amended.

A Declaration that the detention of the Applicant constitute gross and abysmal aberration of his inalienable right to personal liberty as guaranteed and preserved by Section 35 of the 1999 Constitution as amended.

A Mandatory Order that the Respondents pay the sum of Two Hundred Million naira (200,000,000.00) only as compensation for the inexcusable breach, warranted a counter affidavit from the lawyers that represented men of the Nigerian Force in the likes of Samuel Tizhe Esq and David Wankari Esq.

Upon hearing the Applicant’s argument on his fundamental enforcement application and the response by the Respondent, the Honourable Court adjourned the matter to the 29th of November, 2018.

It would be recalled that N.A Dodo Esq. the Assistant Secretary of the Branch,  was unlawfully assaulted, slapped and detained by men of the Police Force at the G.R.A Police Station in Jalingo when he went to represent his client at the police station. Irked by the action of the police, the chairman of the branch, I.C Osuji Esq. set up a team to prosecute the case at the Federal High Court.