Home NBA News Was the NBA President Correct on the Tiger Bar? 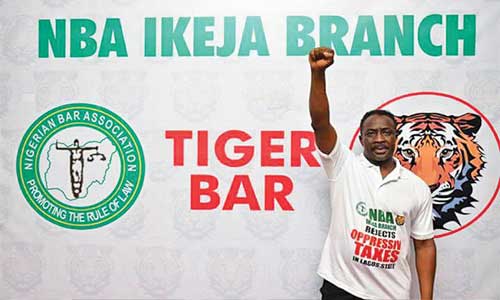 I recently read on the wall of the Chairman of the Ikeja Branch of the NBA that at the just concluded NBA NEC Meeting held in Kano, the President of the Bar disapproved the manner in which the Ikeja Branch is addressing recent societal problems. The case in question was the recent astronomical increase of the Land Use Charge imposed by the Lagos State Government. The Tiger Branch has in very strong terms through public outcry, press conferences, peaceful protests, amongst others categorically opposed the increment. Indeed, the approach of the “Tiger Bar” achieved tremendous results.

The objection of the NBA President, as reported by the Chairman of the Ikeja Bar is that the NBA is not a trade, labour or student union and the activities of the NBA must not be in the manner of some unionism. The Chairman of Ikeja Bar disagreed with the President. Where do I stand?

I just finished reading the autobiography of Chief Victor A. Odunaya titled “His Grace is Sufficient for My Life”. Those who know Chief Odunaiya, know he is a bar man per excellence.

Disturbed by this development, the Ikeja and Lagos Bar held a joint meeting of the two Branches on Monday, 8th June, 1992. At the end of the joint meeting of the Lagos and Ikeja Bar, five cardinal resolutions were reached. The most potent of those resolutions was the ultimatum the two Bar branches gave the Federal Government. They resolved that if by Monday, 15th June, 1992, the two activists were not released, lawyers would withdraw their services including appearance in all courts in Lagos State.

On the 10th of June, 1992, the Federal Government approached the same court whose orders it has consistently flouted seeking ex-parte orders restraining Lawyers from withdrawing their services. The two Bar branches  ignored the ex parte orders and on the 15th of June, 1992, lawyers boycotted the courts. The resolution to continue with the boycott was backed by the then President of the Bar, Chief Mrs. Priscilla Kuye, the then General Secretary, Prince Adesuyo Olateru- Olagbegi who later became a Judge of the High Court of Lagos State. Chief G.O.K Ajayi, Chief B. O. Benson, Dr. Olu Onagoruwa, Professor Itse Sagay were amongst the prominent bar leaders who supported that the boycott should be enforced despite the ex-parte orders.

When the Federal Government saw the resolve of the two Bar branches, Gani and Falana were arraigned before the Chief Magistrate’s Court in Gwagwalada, FCT. They were charged with the offences of conspiracy and treasonable felony. Indeed, the Bar put up a formidable defence for the activists. I would do a recount of that in a separate post.

So I ask again, do I agree or do you agree or should we agree with the NBA President?