Home Opinions What MKO, Gani would have done to Buhari’s Honour Ozekhome 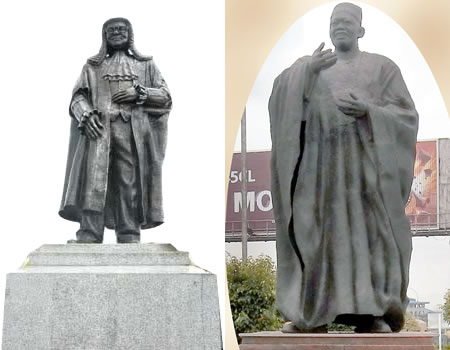 Ozekhome, in a long statement on Friday, said that Abiola, the acclaimed winner of June 12, 1993 elections would have rejected Buhari’s post-humous award of Grand Commander of the Order of the Federal Republic (GCFR) reserved for Heads of State.

He said the late politician would first demand that the Independent National Electoral Commission, INEC, declares him winner and pronounces him as President and Commander in Chief, Federal Republic of Nigeria.

The senior lawyer said Chief Abiola would also have insisted that his campaign slogan ‘Farewell to Poverty’, be accomplished.

In the same vein, the rights lawyer said the late Chief Gani Fawehinmi would have said a categorical “No” to the honour of Grand Commander of the Order of the Niger (GCON), “given the prevailing atmosphere of morbid fear, executive rascality, recession of human rights, rule of law and civil liberties.”

The statement he entitled ‘June 12: The Stubborn Phoenix That Rose from its Ashes,’ said, “I knew the time would come. When the gestation period is over for a pregnant woman, she must surely deliver. It does not matter how – whether through normal delivery or caesarian operation. June was all along like the pregnant woman.

“On June 12, 2014, I moved a motion at the National Conference that not only should June 12 be declared a national holiday and the real Democracy day, but that Chief M.K.O. Abiola and all the souls of the faithful departed of those who gallantly lost their lives fighting for the realization of June 12, be remembered and immortalized.

“I demanded for one minute’s silence for those heroes. The leadership of the Conference led by Justice Idris Legbo Kutigi agreed with me and a minute silence was accordingly observed.

“To me, it is not the right argument that PMB did it for political reasons. Yes, he may very well have done it to shore up his battered political image and fast dwindling democratic credentials. But, the inescapable fact is that he has done the right thing for which history will remember him.

“This is the more reason, I believe the argument should now go, why he should retire quietly to his Daura home, having done one great thing for which he would be remembered. “When Chief Olusegun Obasanjo wrote his scathing letter to PMB in December, 2017, I applauded the letter for the import of its correct contents, even though I am not a fan of OBJ.

“I argued then that we should listen to the message and not look at the messenger. “In the same vein here, we should look at the historical significance of PMB’s political masterstroke on the June 12 brouhaha; and not him as a person, or the ulterior motives for which he did it. I applaud him for this singular act that breathed fresh exhilarating oxygen into his tack luster performance. Would Abiola and Gani Have Accepted these Awards?

“The argument of political pundits and critical voices should now turn to whether these honours, though well-deserved by Abiola and Gani, would have been accepted by them, given the prevailing atmosphere of morbid fear, executive rascality, recession of human rights, rule of law and civil liberties. The answer is a categorical “no”.

“Though well intended, even if for political reasons by PMB, I am convinced MKO and Gani would have out rightly rejected the national honours if they were alive. I will give my reasons anon.

“On 14th December, 2008, barely 9 months before his death, Chief Gani outrightly rejected the national honour of OFR (Officer of the Federal Republic of Nigeria), bestowed on him by the then President, Umaru Musa Yar’Adua.

“In rejecting the honour and giving his reasons, Gani said, inter alia: “Today I am seventy (70) years and 8 months old. I am struck down by lung cancer for which I have been receiving medical treatment outside my country because my country Nigeria has one of the poorest medical services in the world but one of the richest countries in the world in terms of revenue.” Question: has anything changed?

“Answer: “No”. Even PMB has himself been receiving medical treatment in London, outside Nigeria. Deprecating the poor socio-economic and political situation in the country, Gani was emphatic that: ‘whether now or in the life beyond, how can I wake up in the morning and look at the insignia of honour bestowed on me under a government that persecutes…Nuhu Ribadu?’ (Whom he believed did a great job on the anti-corruption fight).

“Does this government not persecute political opponents, opposition and critical voices? Answer: yes. Gani had continued: ‘A government that covertly and overtly encourages corruption has no honour in its arsenal of power to dispense honour. Consequently, I reject the dishonor of OFR termed ‘honour’ given to me by the Federal Government…

“I wish to reiterate that in all ramifications of human existence, the masses have found themselves in the doldrums of pain occasioned by gross mis-governance of the country… the decadent socio-economic situation does not engender the well being of ordinary people and there is no hope in sight. In view of the foregoing, I reject the award of OFR.’

“The question is whether anything has changed for the better since 15th December, 2008, when Gani, in rejecting the Yar’Adua National honour, listed 8 critical areas the then government had failed. I am afraid, nothing has changed.

“Gani had ended his rejection of the national honour with a ‘clarion call on the suffering masses’ to ‘unite and fight for your legitimate right to the abolition of poverty. Why should you continue to suffer while your leaders and their families continue to enjoy the best at your expense? Thus, Gani would have rejected the honour of GCON.

“But even then, I thank PMB for doing the right thing, just like Yar’Adua had done. As regards the martyr of democracy, Chief MKO Abiola, who paid the supreme price in his quest for genuine redemptive messiahnism, he would also have rejected the GCFR given him, except certain things were first done.

“Recall that Abiola had rejected his bail which was burdened with unacceptable conditionalities. If Abiola were alive, he would demand that before he accepts the GCFR honour (reserved only for Presidents and Heads of State, the presidential elections in which he clearly emerged the winner in the freest, fairest and most credible elections ever held in Nigeria, should first be declared by the present INEC which succeeded Professor Humphrey Nwosu’s National Electoral Commission (NEC), which had conducted the election. “He would insist that he be first formally pronounced “President, Commander-In-Chief, Federal Republic of Nigeria”, before accepting same.

“He would insist that his campaign slogan of ‘farewell to poverty’ be accomplished. To me, the argument of what reasons actuated PMB in declaring June 12 our democracy day, and giving post-humous awards to Abiola and Gani, does not arise at all.

“If anything, the very acts themselves form the very prong and catalyst to hold PMB strictly accountable to the ideas, philosophy, and democratic credentials and convictions that drove these two great sons of Nigeria, nay, Africa.

“These include socio justice, egalitarianism, respect for human rights, observance of the rule of law and due process, treatment of all Nigerians equally, wholesome and non-selective fight of corruption, good, transparent and accountable governance, respect for the will of the people through a fair, just, credible and respectable electoral process, etc.

“In endorsing and applauding PMB for this historic feat, let me add that he must carry out the necessary legal, constitutional and legislative requirements to bring this to fruition. “For now, the pronouncement remains in the realm of executive fiat.

“PMB should also go ahead, with the necessary political will, to immediately restructure the lopsided Nigerian federation, remove the glaring nepotic and cronystic imbalances and enthrone true, fiscal federalism.

“He should also ensure that the June, 1993 presidential election results are officially declared and Abiola formally pronounced the winner, and therefore president of Nigeria. “His name, undoubtedly, will be inscribed in gold in Nigeria, whether or not he goes ahead to contest the 2019 presidential election.

“To me, he should not, even though it is his constitutional right to do so. He should play the Nelson Mandela card. God bless Nigeria.”

NASS Can Enact A New Constitution (2)

How to Pass Bar Finals and Navigate Study Life in The...