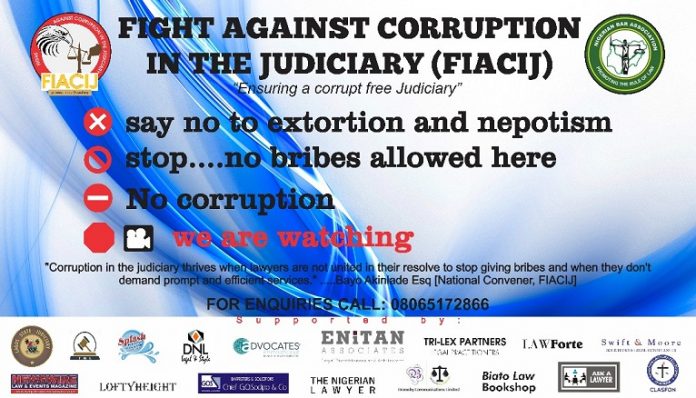 How did you come about Project “I.D.E.N.T.I.F.Y” and what is the project all about?

I.D.E.N.T.I.F.Y  came to me as an idea. First it was just the word IDENTIFY that came to mind, then I started building a project idea around that word IDENTIFY from the feedback I was getting from various whatsapp, facebook  platforms and from direct interactions with people during and after the “Give No Bribe” Initiative.

Basically from the month of April, we are challenging Lawyers and Litigants to:

How long will the project go on and what will it entail?

Project IDENTIFY will last for the remainder of the year, 2018. We have however broken our engagement timetable around the acronym I.D.E.N.T.I.F.Y so that every month we will look at a specific letter in the word ‘I.D.E.N.T.I.F.Y’ and engage accordingly:

I – INVESTIGATE: In the month of April our focus will be to investigate corrupt elements within our Judiciary. This process will run the course of the rest of the year but in April, we will be taking a closer look into WHY corruption has eaten so deep. We will be asking lots of questions about how the Courts operates, if there is no paper for the registrars to work with, we will be asking WHY and we will investigate the Root Cause of it.

D – DEVELOP STRATEGIES:  In the month of May, while we continue to investigate, we will begin the exercise of developing strategies for engaging the problem of Corruption holistically. Corruption is first in our hearts and minds before it manifests physically so it takes a willing heart and an open, reformed mind to engage it. May is the month of brainstorming ideas to tackle corruption while doing all we can to resist.

E – ENGAGE: In June, we will ENGAGE with the major players; NBA, JUSUN and the Judiciary. The idea is to bring them together to discuss ways of liberating our Judiciary and to come up with programs, ideas and events that will promote a corrupt free Judiciary.

T – TRAINING: In July, as a follow up on engagement, we hope to organise trainings that will teach lawyers how NOT TO GIVE A BRIBE AND HOW TO AVOID AND TACKLE EXTORTION. We will plan training, talks and seminars for any group interested in combating corruption in our courts. During the training, we will be identifying and examining the laws, practices and behaviours that cause corrupt practices with an attempt to tackle them.

I = INFORMATION DISSEMINATION: In October; after the long vacation, we will be providing information about how to interact with our Courts, steps to take when filing a process etc. so that at no point in time will the lawyer or litigant be oblivious of the process thereby liberating themselves from elements within the Judiciary that capitalize on the user’s ignorance to extort money.

F =  FINALIZE: In November,  we will collate all our work, summarize all our efforts, engage again with stakeholders with a view of focusing on establishing an institutional structure that will monitor the courts, lawyers and litigants as they interact with the judiciary. The goal is to birth a compliance department within the judiciary to ensure best international practices.

Y = YOU: In December; the emphasis would be on the individual as the key to ending CORRUPTION in the JUDICIARY.

This sounds like a lot of work, how do you intend to make this happen?

It is a lot of work but I am not alone in this. Many individuals, groups, including the Judiciary itself are engaged in this already. You will recall that the Chief Judge of Lagos already has a mission and vision statement which her lordship is implementing. This Project simply supports that effort. We have several individuals and groups within the Legal Community who are also interested in a corrupt free Judiciary, we will be partnering with them as we are currently partnering with the media and legal blogging sites such as yours to educate and inform the general public.

You mentioned working with the Chief Judge of Lagos State, how does that impact on your independence as a watchdog group and what about other States of the Federation; will this project extend to other courts outside Lagos?

It is interesting you should ask about our relationship with the Judiciary in Lagos State. Many people have commented on this to the extent that we have been accused by some of being a tool in the hands of the Judiciary and that we are not really independent. My response is simple; when you have a common enemy, do you work separately and in disunity or do you bring your strengths together and work for the common purpose you have identified? USA, China and Russia are all part of the UN does that have anything to do with their independence? I worked with an organization called Advocates International for about 7 years and our approach was “ HOW CAN WE HELP YOU” I visited governments in over 30 Countries around the world with that single phrase. We haven’t come to condemn the Judges, Magistrates and Judicial Staff; we have simply come to say “HOW CAN WE HELP DEFEAT CORRUPTION WITHIN THE JUDICIARY”.

Concerning other States, we have many lawyers who have taken up the challenge in their respective jurisdictions and I keep encouraging anyone who can; to use what we are doing in Lagos and duplicate it in their respective States. We are also exploring some strategic partnership with the NBA National body in this regard.

On a final note; we hear that you are contesting for the Chairmanship position of your NBA Branch; how do you intend to carry on with FIACIJ if you do win?

Well, the operative word there is “IF” I win the elections. First and foremost, I am a member of the Ikorodu Branch of the NBA. The FIACIJ idea started in my mind ‘as a member of my local branch’. I usually tell people who ask me this same question: What I am doing now with FIACIJ is the primary responsibility of every Branch Chairman at least until corruption is completely eradicated. This is because the welfare of our NBA members is seriously affected by it, the rule of Law is marred by it, access to Justice is seriously compromised by this corruption in our judiciary. Why was NBA established? So how will FIACIJ be affected if elected Chairman of my Branch? I think it can only grow stronger and my branch and other branches across the nation will only benefit more.

Don’t be a part of the problem, stop giving bribes today. The solution is in your hands.

We would Stop Lawyers and Litigants from Giving Bribes in our...