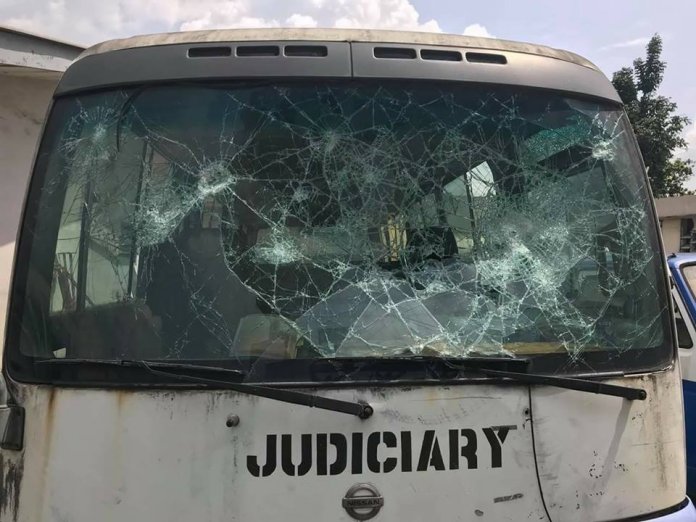 There were sporadic shootings Friday morning at the premises of the High Court complex of Rivers State judiciary as hoodlums allegedly trying to prevent a court injunction seeking to stop the All Progressives Congress APC local government congress scheduled for Saturday shut down the Rivers State judiciary complex preventing the courts from opening for their normal daily operations.

Trouble started when members of the two factions of the APC were trying to address some journalists who were seeking information on the reasons for the crowd of party supporters at the judiciary complex and why people were refused access into the courts.

After some time some of the party supporters who were angry at the development started throwing bottles of soft drinks and water into the crowd thereby sparking off a pandemonium as people ran to different directions for safety.

The situation was to escalate and spread to adjourning streets of William Jumbo, Azikiwe Road and Moscow Road even as some police personnel who had been monitoring the situation began shooting into the air.

Our reporter gathered that some officials of the Peoples Democratic Party (PDP) who were miffed by the closure of the court stormed the premises with their boys, chased out the APC supporters at the gate and forcefully opened it.

Some of the know PDP faces who came to the complex included Emmanuel Agumah (SAN), State Attorney General and Commissioner for Justice, Samuel Nwanosike, Publicity Secretary of the PDP and Same Oge, member representing Emohua constituency in the State House of Assembly.

The PDP supporters were later engaged by the APC supporters who had gone back to reinforce in a stone hauling match and later chased out of the complex.

This created serious confusion around the court premises and adjourning areas with sporadic shootings by the Police which by then had also received reinforcement from its headquarters about 10 minutes’ walk away from the court.

One journalist, Bassey, a freelance cameraman with Channels Television was unlucky as he ran into the hands of some of the hoodlums who beat him to the pulp and robbed him of his personal belongings including his video camera.

He was said to have been taken to an undisclosed hospital for treatment.

As at the time of filing this report, security operatives made of the Special Anti-Robbery Squad (SARS) had cordoned off the judiciary complex from all adjoining streets and engaging motorists trying to access the nearby state secretariat to rigorous search.

There were conflicting reports about who exactly was responsible for the shutting down of the courts or for what purpose as some said it was a faction of the APC who wanted to scuttle Saturday’s local government congress of the party and others saying it was hoodlums that locked up the courts.

Speaking to journalists at the premises of the judiciary complex, a lawyer, Nworie N. Nworie said: “yesterday (Thursday) a motion was filed by some aggrieved APC members praying the court to grant them an injunction to stop the Saturday local government congress”.

Nworie added; “the ruling for the injunction was fixed this morning (Friday), it is the defendant faction that came this morning to shut down the court under the watch of security operatives”.

But a member of the APC and former Deputy Mayor of Port Harcourt Local Government, Nancy Stephen said it was not true that APC members locked the courts.

“APC members did not lock the court, it is some hoodlums, thugs that claim to be part of APC that locked up the courts”, Stephens stated adding, “we are a law-abiding party, we believe in the rule of law, we do not engage in any activity that is inimical to the peace of Rivers State.

We heard that something is happening and as law abiding citizens we just came to assess the situation ourselves instead of being told what is going on.

For me, as APC member I don’t have an inkling of what is going on”.

“People have infiltrated APC saying they are APC members, I stand here telling you that APC has nothing to do with it”, she added.

The official reaction of the Rivers APC was still being awaited as at the time of filing this story.