Home Opinions Why Some Customary Practices in Nigeria are Illegal 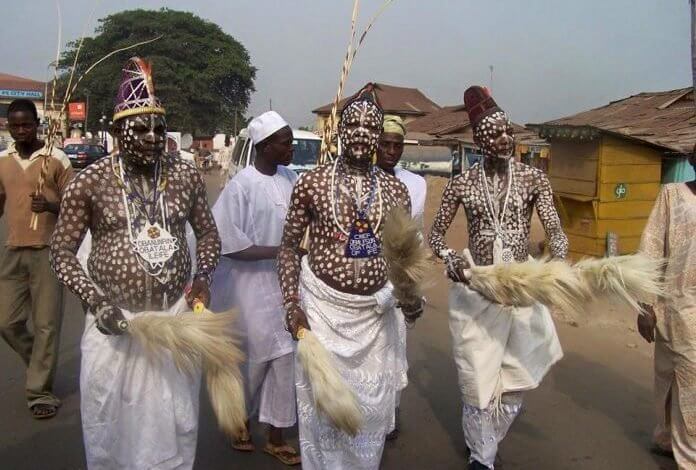 As legal practitioners, you cannot close your eyes to the social, political and economic  problems of our time. Therefore, you have a duty to help rescue our society from pervasive lawlessness, corruption and anti-social activities.” Hon. Justice Walter Onnoghen, the Chief Justice of Nigeria.

Lawyers and budding legal practitioners who shy away from condemning ridiculous cultural practices in our society, have not only betrayed their calling, but the entire existence of humanity.

Hence, it would not be deemed out of place for a lawyer-in-equity like myself to criticize some anachronistic customary practices in our society. The Chief Justice of Nigeria, His Lordship, Hon. Justice Walter Onnoghen affirmed this, too, at the July 21, 2017 call-to-bar ceremonies while addressing the new wigs.

It should be noted that customary practices like Oro and Agemo as prevalent in some Yoruba communities are not only repugnant to natural justice, equity and good conscience, but incompatible with the provisions of our laws and against public policy.

Let it be known that these customary practices are very illegal and thus are alien to our jurisprudence. Though, Section 315(3),(4),(b) and (c) and section 265 and 280 gives special attention to customary law and makes provision for the establishment of the customary court of appeal for the Federal Capital Territory as well as customary courts of Appeal for each states respectively.

Customary law, according to the Supreme Court, in Oyewunmi V. Ogunesan (1990) 3 NWLR (Pt.137) 187 is the living law of the indigenous people of Nigeria, regulating their lives and transactions. It is organic and not static.Also, in Aku V. Aneku (1991) 8 NWLR Pt. 209, p. 280 at 292 CA, Ndoma-Egba, JCA, in the Court of Appeal defined it as: The unrecorded tradition and history of the people, practised from the dim past and which has grown with the growth of the people to stability and eventually become an intrinsic part of their culture. It is a usage or practice of the people which by common adoption and acquiescence and by long and unvarying habit has become compulsory and has acquired the force of law with respect to the place or the subject matter to which it relates.

Importantly, in law, it is settled that for a customary law to be deemed to be valid, it must pass through some validity tests, which customary practices like Oro and Agemo have failed. Hence, they cannot be rendered to be valid.The court has held in the celebrated case of Agbai V. Okagbue (1991) 7 NWLR Pt 512, p. 283 CA that the importance of these validity tests is to fine-tune customs so they might maintain relevance in our legal system. Section 315 of the 1999 Constitution is the basis of these tests. Hence, in my view, any law, which is an impediment to development of our society should be modified or jettisoned, as the case may be, to suit our clime.

The repugnancy test is the first test of validity. This test requires that any custom or customary law must not be repugnant to natural justice, equity and good conscience.Natural justice is obviously a test of fairness and fair hearing of a custom. This is upheld by the grundnorm where Section 36 of the 1999 constitution guarantees the fundamental right to fair hearing.

In the popular case of Guri V. Hadejia Native Authority (1969) 4 FSC 44, it was exclusively held by the court that such Malik custom preventing fair hearing of a suspect accused of high way robbery was not fit to be classified as customary law as it was against natural justice.

It would be of golden benefit to note that natural justice upholds two key principles: ‘audi alteram partem’ which guarantees fair hearing and ‘nemo judex in casua sua’ which also prevents one from being the judged in a case of interest to him. See the landmark decision in the celebrated case of Garb & Ors. V. University of Maiduguri (1986) 1 NWLR pt 18, p. 550 SC.

Consequently, for traditional rulers to display fascist-like tendencies by decreeing that punishments would be meted out to those that refused to follow their anachronistic, draconic and illegal orders is everything but an insult to our sacred laws. In the same vein, customary laws must not be against equity and good conscience. Equity in its totality is fairness, rightness and justice. Any custom must have the nature of equity while it must be born of good conscience, purpose and reason. See Inasa V. Oshodi.

Another test is the incompatibility test. This test requires that any rule of customary law must not be incompatible with any existing provisions of the constitution nor any existing statute for the time being in force in such a community in Nigeria. See Re Effiong Okon Ata (1930) 10 NLR 65 where the court held that the right to administer with the property of a slave was now incompatible with the Slavery Abolition Ordinance No. 35 of 1916.Pursuant to the above, it is crystal clear that this is where the traditional rulers have goofed. What a big time goof! It is a common knowledge that during these Oro and Agemo festivals, the fundamentally guaranteed right to the freedom of the inhabitant of such communities are always restricted. See Section 41 of the 1999 Constitution.

It should be a point of note that during Oro and Isemo festivals, females are mostly restricted to their homes as they are not allowed to move freely. This is not only an aberration of their rights to freedom of movement, as expressed hereinabove, but also a gross infringement of their right to freedom of discrimination as provided in Section 42 of the 1999 Constitution and several international covenants and protocols like the Covenant on the Eradication of Discrimination Against Women (CEDAW), though not yet domesticated in our jurisdiction. Notwithstanding, the proviso of the grundnorm still holds sway!

No doubt, this prompted the decision of the court in Mojekwu V. Mojekwu (1997) 7 NWLR Pt 512, p. 283 CA where a customary law discriminatory against female children was held to be against Section 42 of the 1999 Constitution and not enforceable.

Lastly, as a matter of necessity, customs or customary law must pass the public policy test. Public policy principally centers on the security and welfare of the people, which is the primary purpose of the government as provided in Section 14(2)(b) of the 1999 Constitution.

This formed the line of decision in Okonkwo V. Okagbue (1994) 9 NWLR Pt 368, p. 301. In addition to this analysis, by deliberately coercing the people (out of their will), to forcefully take part in these customary practices is an impediment and a gross violation to the rule of law. In ipsissima verba of the inimitable late Socrates of the Supreme Court,

Justice Chukwudifu Oputa, rule of law is a shield and a fortress against tyranny and oppression. It is the defender and custodian of individual rights and the liberties of the citizen. It is an asylum and comfort to the oppressed and a guarantee of hope for the innocent. The rule of law is also a chilling to the oppressor, the vile and the malignant.

In the final analysis, to predicate on the above expostulations of the law, it can be deduced that customary practices like Oro and Agemo as trodden in some Yoruba communities are not only repugnant to natural justice, equity and good conscience, but also mitigate the provisions of our laws and against public policy. Hence, they should be jettisoned.

Anyone who disagrees with the already established arguments hereinabove is either delusional or deliberately violating the already established facts, empirical precedents and statutes. These customary practices are not only illegal, but an affront to justice. Can the traditional rulers claim to be oblivious of the law? Are they above the law? In Nigeria, can we for once be lawful? Oyesomi is an undergraduate student of law at Olabisi Onabanjo University, Ago Iwoye and the Secretary-General, Legal Minds for Good Governance Initiative (LMGGI).

Securing the Independence of the Judiciary: The Way forward

What Every Property Investor Must Know About The Land Use Charge...