Home News Wike Swears in New AG, Late Aguma’s Widow and 3 Others as... 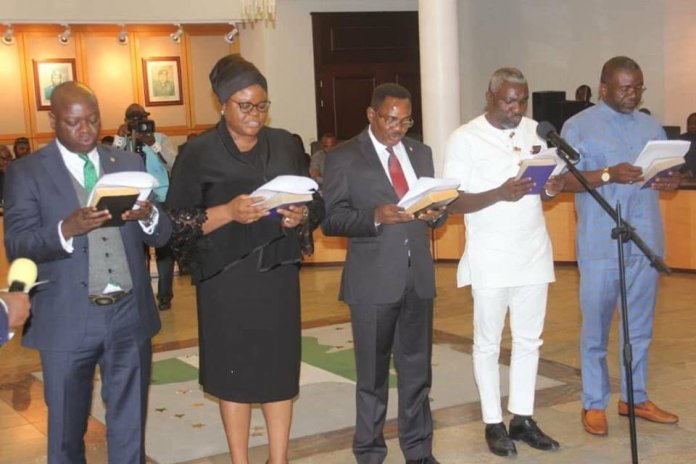 Governor Wike said other newly sworn-in commissioners will be posted in due course.

At the swearing in which was held at the Government House Port Harcourt, on Monday, the Governor called on the newly sworn-in commissioners to work towards making a difference in the development of the state.

Governor Wike said: “We are coming to the end of our first term, but you can still make a difference.

“Once you have the passion, you can still make a difference. It is a privilege to serve the state and you have to make it count. Don’t waste the opportunity “.

While charging the newly sworn-in commissioners to take their jobs seriously, Governor Wike asked them to conduct themselves in acceptable social manner.

He said: “Take your job seriously and don’t involve yourselves in illegality. As a commissioner, don’t place yourself in a compromising position “.

The governor charged them to always ensure that they place the interest of the state above other considerations in their activities.

In an interview, the New Attorney-General of Rivers State, Dr Zaccheus Adango stated that he will bring his experience and knowledge to bear on the discharge of his responsibilities.

Also speaking, Widow of the Late Attorney-General of Rivers State and Commissioner for Social Welfare, Mrs Inime Aguma said that she has the requisite training and exposure to make a difference in her new office.

Politicians Like Virus Have Finally Infiltrated the “Holy of...