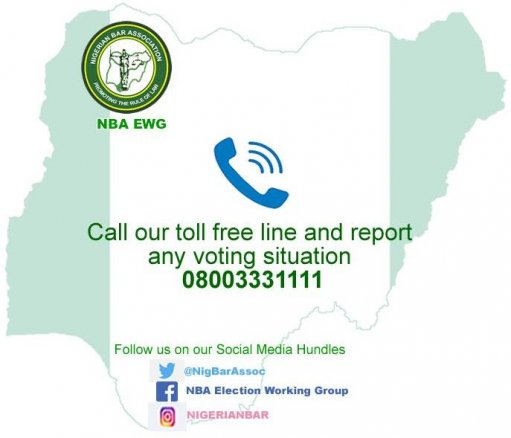 The Presidential and National Assembly Elections were conducted by the Independent National Electoral Commission (“INEC”) on Saturday, 23rdFebruary, 2019 in all the thirty-six States of the Federation as well as the Federal Capital Territory (FCT). The Elections were initially slated for February 16, 2019 but were postponed at the instance of INEC by one week. The Gubernatorial and Houses of Assembly elections are now scheduled to hold on Saturday, 9th March, 2019.

On February 12, 2019, the President of the Nigerian Bar Association, Mr. Paul Usoro, SAN inaugurated the 2019 NBA-EWG with the core mandate to, amongst others, observe the Presidential, Gubernatorial, National and State Houses of Assembly Elections, 2019 and ascertain and be able to comment on the extent of the conformity of the processes and procedures for the conduct of the elections with the relevant laws, regional and international standards and best practices.

The work of the 2019 NBA-EWG as stated by the NBA President was to focus, amongst others, on observing the following:

Having been duly accredited by the electoral umpire, INEC, the 2019 NBA-EWG not only mobilized its members but also deployed the membership of the Association nationwide to observe and or monitor the elections in all the States of the Federation and the FCT.

To ensure a seamless operation, the 2019 NBA-EWG set up a Situation Room at the National Secretariat of the Association in Abuja where it receives real-time reports and live feeds of events from its members who were deployed on the field for the purpose of its mandate. Additionally, and in order to achieve promptness, speed and coordination, the 2019 NBA-EWG procured a toll-free telephone line where members called in with their reports and, also, activated various social media platforms where it streams live reports and events as contributed by members.

This constitutes the 1st Interim Report of the 2019 NBA-EWG. The Report makes no pretence at completeness but is submitted only as a precis of the initial observations of its members in respect of or in relation to the conduct of the national elections of Saturday, 23rd February, 2019. It is the 2019 NBA-EWG’s legitimate expectation that a comprehensive, composite and all-encompassing report will be published at the completion each of the two electoral tranches i.e. (a) the Presidential and National Assembly Elections; and (b) the Governorships and Houses of Assembly Elections. Meanwhile, as necessary and required, additional Interim Reports may be issued by the 2019 NBA-EWG prior to the publication of the final comprehensive report of the Group in respect of the Presidential and National Assembly Elections.

A total of Ninety-One (91) registered political parties participated in the elections, although only Seventy-Three (73) of these parties fielded candidates for the presidential elections in which the incumbent President and candidate of the All Progressives Congress (APC), Muhammadu Buhari, GCFR and a former Vice President and candidate of the Peoples’ Democratic Party (PDP), Alhaji Atiku Abubakar, GCON, are said to be the leading contenders.

In respect of the Presidential and National Assembly Elections of Saturday, 23rd February, 2019, the 2019 NBA-EWG reports as follows:

INEC and the challenges of logistics

The NBA-EWG notes that although the elections were originally scheduled to hold on Saturday, 16th February, 2019, INEC caused same to be postponed by a week, citing “logistical challenges”. The NBA-EWG notes with regret, however, that despite the postponement, the elections recorded some noticeable but avoidable lapses associated with the same ‘logistical challenges’.

For example, members reported that polls did not commence at the scheduled time of 8am in most polling units nationwide. This drawback was, however, more manifest in the States of the South-South, South-East, South-West and North-Central regions of the country.

In a number of polling units across the country, election materials, especially ballot papers, were either over-supplied (i.e. in excess of the registered voters in the polling unit) or under-supplied. From reports available to us at this time, this situation was prevalent in the South-South and South-East sub-regions, particularly in Edo, Akwa Ibom, Imo and Enugu States respectively.

The 2019 NBA-EWG notes as well that in isolated cases (Owerri in Imo State for example), INEC officials conducted the elections using photocopies of approved ballot papers. In polling units where voters complained about this unwholesome practice, the INEC officials rebuffed them and proceeded to conduct the elections in that manner, nevertheless.

Many voters also had difficulties locating their polling units as there were insufficient details on the PVCs and at INEC website on how to locate one’s polling unit. This was very prevalent in Abuja.

The splitting of the Polling Units into sub-units based on alphabetical order without informing the voters or putting in place some order in executing same, initially caused disenchantment as voters had lined up randomly or in a single straight line in accordance with their time of arrival not knowing that such polling units had been subdivided.

INEC hotlines were almost always unreachable and when reached there was nobody to address callers’ enquiries and in some instances the calls terminated on their own.

The major complaints of the voters, as aggregated by members, revolve around the card reader. The 2019 NBA – EWG reports that the performance of the card readers, although not generally unsatisfactory, raised concerns and provided sufficient basis for anxiety among the voting populace.

ALSO READ   Election: Lawyer Threatens to Sue INEC Over Use of Corps Members

Some of the acknowledged complaints about or concerning the card reader device include but are not limited to: inability to authenticate fingerprints or biometrics, inaccurate or false outputs for identified card holders, non-recognition of certain alphabets associated with some surnames or forenames.  Illustrative locations where these incidents occurred include some polling units in FCT, Kano and Akwa Ibom States.

The Working Group reports also that in most units and concerning the malfunctioned card readers, presiding officers commendably resorted to manual accreditation to enable registered voters to cast their ballots. However, this was not devoid of the associated suspicion by the voters of possible abuse of such discretion by the polling officials.

The NBA-EWG reports also that in some polling units in Abuja, smart card readers recognized voters’ cards but produced unintended outputs, particularly in cases where, for example, the facial features of the Permanent Voter’s Card (PVC) holder were inexplicably different from those displayed on the card reader device. In such cases, the discretion whether the affected voter proceeds with the voting process or should be disenfranchised rested with the presiding officer. It was reported that in most of such peculiar cases, such discretion was exercised against the registered voters.

By and large, the preponderance of opinion from the NBA-EWG, 2019 is that the smart card device although it may not have totally failed the integrity test, created appreciable anxiety among the voting populace consequent upon the reported cases of malfunction and/or outright performance failure of the device.

We also observed a nation-wide absence of technical assistance needed to resolve issues associated card reader malfunction. There were also issues of non- availability of back-up card readers in most of the polling units observed.

There were several reports and live feeds of electoral violence from all over the country. Party thugs and hoodlums had a field day invading voting centers to harass, molest and intimidate voters and, in some instances, INEC officials. Strangely, in places where these despicable acts were recorded or registered, security agents were either complacent or complicit. Rivers, Lagos and Kogi states were notorious in this regard.

There were also confirmed reports from different parts of Nigeria where voters were prevented, hindered or inhibited from performing their civic responsibilities on the suspicion that their votes had the potential to produce outcomes that were undesirable to or unintended by the illegal “enforcers” and “gatekeepers”. Thus, voters were chased away and forced to return to their homes. Akwa Ibom, Niger, Lagos, Imo, Kogi and Benue States rank high as examples of places where these unconscionable and loathsome acts of voter intimidation and suppression took place.

In some places, such as Lagos, Kano and Edo States, amongst others, voters who wanted to vote for certain candidates were threatened with violence, suffered violence and/or were prevented from voting by the earlier referenced illegal “enforcers” and “gatekeepers”. Cases of supervised or guided voting were also reported in parts of Kano State.

Additionally, the NBA-EWG situation room was inundated with widespread reports confirming the manipulation of election processes by INEC officials aided by party thugs and security agents. Such reports included incidents where the Electoral Officers deliberately voided votes cast, refused to allow some persons to vote, refused to allow voters whose names were on the voters register to vote by using Incidence Forms where there were card reader issues, giving out ballot papers with 2015 dates, refusing to stamp or sign or date ballot papers, refusing to allow some party agents to inspect and confirm the sensitive materials brought to polling units, etc.

Secrecy of the voting process

It was observed that all over the nation the INEC polling booths did not offer sufficient privacy to voters. Party agents and some other persons had widespread, easy and unrestrained access to voting areas to either supervise voting by voters or to pry into how they were voting. Lagos, Kano, Edo, Imo and parts of Rivers States illustratively recorded these incidents of gross breach of voter privacy. Neither the electoral officers nor the police officers around the voting areas made any effort to prevent and/or stop this unwholesome practice.

The NBA-EWG reports that despite the late arrival of INEC officials and voting materials, the turn-out of voters and their enthusiasm for the elections was largely impressive and satisfactory.

Voters in many places helped to organise themselves by writing their names on sheets of paper so as to ensure orderly and seamless conduct of the accreditation and voting processes.

In most of the polling units observed, there were significant turnouts of senior citizens, women and even persons with disabilities.

In cases where there were infractions of electoral laws or threats of violence or actual violence, it was observed that the police personnel at those polling units stayed aloof and did nothing to prevent or stem those infractions and/or acts of violence. It was also observed that in some voting centers the number of police personnel posted there was not commensurate with the large number of registered voters in the centers.

As earlier indicated, this is but the 1st interim report of the 2019 NBA-EWG which may be followed by other interim reports, as deemed necessary and required by the NBA-EWG. A detailed and final Report of the Presidential and National Assembly Elections will be published by the NBA in the fullness of time, specifically, after the release of all the Presidential and National Assembly Elections results which would be preceded by (a) the complete collation of the results by INEC; and (b) the conduct of the elections in places where INEC has now cancelled and rescheduled polls, notably in Rivers, Lagos and Akwa Ibom States.