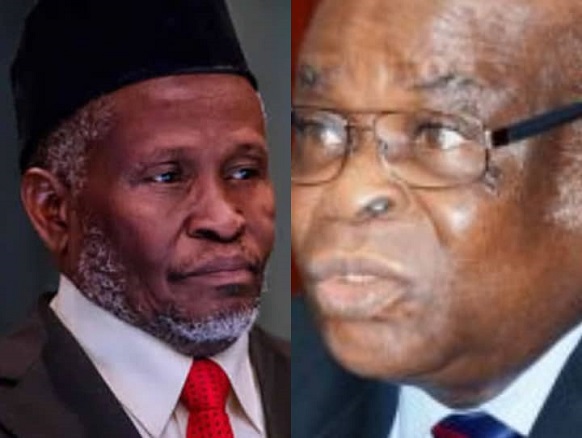 He contended that President Buhari did no wrong by relying on the CCT order to suspend Onnoghen.

Justice Muhammad stated he committed no offence by submitting himself to be sworn in acting capacity following the order of the CCT and to prevent the vacuum that would have been created by Onnoghen’s suspension.

The Acting CJN made public his positions on Onnoghen’s suspension and eventual conviction, in his response to a suit filed before the Federal High Court, Abuja by the Incorporated Trustees of Malcom Omirhobo Foundation.

The plaintiff argued that, by accepting to be sworn in as the Acting CJN, while Onnoghen was lawfully suspended, Justice Muhammad “conducted himself in a manner that cast doubt of confidence in his integrity and impartiality of the Judiciary and having made himself a tool used in the violation of the Constitution of Nigeria”.

Listed as defendants to the suit are the National Judicial Council (NJC), the Federal Judicial Service Commission (FJSC), Justice Muhammad, the Federal Government, Buhari, the Attorney-General of the Federation (AGF) and the Senate.

In a counter-affidavit filed for him by his team of lawyers led by Lateef Fagbemi (SAN), Justice Muhammad insisted that President Buhari breached no law or procedure in suspending Onnoghen based on an ex-parte order by the CCT.

The acting CJN, who noted that Onnoghen has since resigned after his suspension, argued that neither him, not the President did any wrong in their handling of the Onnoghen case.

Justice Muhammad added: “The 5th defendant (the President) has the power to remove or suspend any person occupying the office of the Chief of Nigeria being the appointing authority.

“As at January 25, 2019 the order of the Code of Conduct Tribunal also directed the 5th defendant to swear in the most senior Justice of the Supreme Court as the Acting Chief Justice of Nigeria.

“It was pursuant to the said order of the Code of Conduct Tribunal that the 5th defendant appointed the 3rd defendant as the Acting Chief Justice of Nigeria.

“There was also no need for the 5th defendant to approach the 7th defendant for support by majority of two-third votes, before the erstwhile Chief Justice of Nigeria could be suspended from office.

“The 5th defendant followed due process of law in the appointment of the 3rd defendant as the Acting Chief Justice of Nigeria”, adding that “there has not been any negative impact on the Nigerian Judiciary as there is renewed belief by the common man in the Judiciary as his last hope.”

When the case was mentioned on Monday, Justice Inyang Ekwo directed parties to file all necessary processes and adjourned till June 7, 2019 for hearing.

Termination of Employment ‘With or Without’ Reason, No Longer the Position...