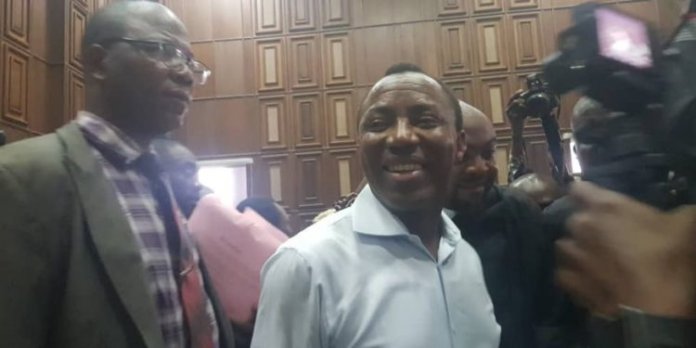 The Attorney-General of the Federation and Minister of Justice, Abubakar Malami has ordered the Department of State Services (DSS) off the trial of Omoyele Sowore.

According to a statement by the Special Assistant to the AGF on Media and Public Relations, Mr Umar Gwandu, the order is part of deliberate efforts to probe emerging issues related to the recent imbroglio in Sowore’s case and for speedy
dispensation of justice.

The Attorney General’s move follows the outrage sparked by the manner in which the DSS has handled the matter, particularly Sowore’s rearrest.

Before the DSS stormed the court in a bid to rearrest Sowore, hours after releasing him, the agency had come under criticism for its delay in releasing him on bail despite a court order.

Mr Gwandu said the request for the transfer of the case to the office of the Attorney-General and Minister of Justice was contained in a letter dated 11th December, 2019 and addressed to the Director General of the Department of State Services, National Headquarters Abuja.

The letter, which was signed by the Solicitor-General of the Federation Dayo Akpata reads: “The Attorney-General of the Federation and Minister of Justice upon a further review of the case has directed the immediate takeover of the prosecution of all charges in respect of Omoyole Sowore by the Federal Ministry of Justice in line with the provisions of Sections 150(1) and 174 (1) (a-c) of the
1999 Constitution (as amended).”

The letter requested the Director of the DSS to “promptly forward all the case
files” in respect of Omoyele Sowore to the office of the Attorney-General of the Federation and Minister of Justice.

Mushin Property Declared the Most Litigated Property in Lagos