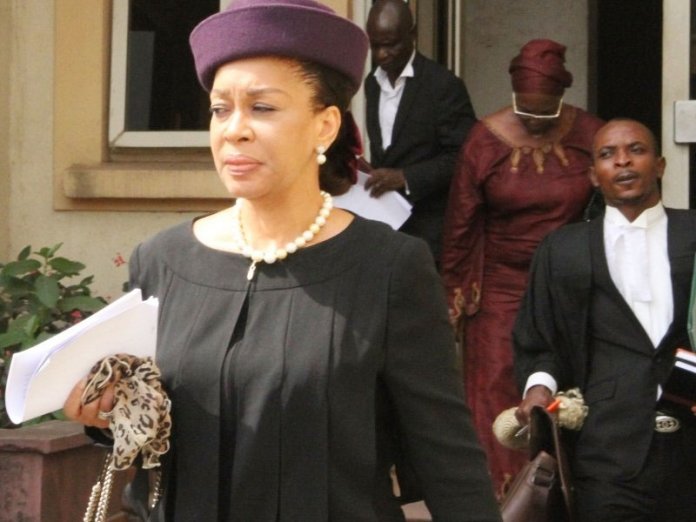 The Economic and Financial Crimes Commission charged Ofili-Ajumogobia and a Senior Advocate of Nigeria, Godwin Obla, on 18 counts bordering on Conspiracy, Unlawful Enrichment, retention of Crime Proceeds and Money Laundering.

The defendants are standing trial before Justice Rilwan Aikawa.

They were re-arraigned on May 15 and had both pleaded not guilty to all counts of the charge.

The court had granted them bail in the sum of N10million each, with two sureties in like sum.

When the case was called on Thursday, Chief Robert Clarke, SAN, announced appearance for the first defendant, while Chief Ferdinand Orbih, SAN, appeared for the second defendant.

Clarke then informed the court of a Preliminary objection challenging the court’s jurisdiction to entertain the charge against Ajumogobia.

Counsel argued that the first defendant had not been dismissed as a judge of the Federal High Court since there was no gazette evidencing her said dismissal.

He said that a failure to show evidence of such dismissal denied the court of the requisite jurisdiction to entertain the case.

Besides, the defence argued that the contention of the prosecution in paragraph L of its affidavit that the defendant had not been tried was wrong.

He argued that the defendant was prosecuted for about two and half years before an Ikeja division of the Lagos High Court, with 18 witnesses called by the prosecution, before the court dismissed the suit.

He, therefore, urged the court to hear the defendant’s application.

On his part, second defence counsel, Orbih also informed the court of his motion seeking to split the charge and try the second defendant separately.

He also argued that his application was not challenging the validity of the charge, but the purpose to which it is being used.

Orbih argued that the use of the process of the court was oppressive, and abusive, having in mind that same issue is being contested at the Court of Appeal.

He urged the court not to “Share” jurisdiction with the appellate court, but to first hear the various motion pending before it.

In response, the prosecutor, (Oyedepo) urged the court not be persuaded to hear the motions alone, but that where the court is inclined to hearing same, it should also proceed with the trial, following which the court would deliver a composite judgement in the end.

He argued that the various applications by the defence were aimed at stalling trial and clogging justice, adding that the Administration of Criminal Justice Act, seeks to redress such mischief of delays.

Besides, Oyedepo sought to abandon the said paragraph L of his affidavit, on the grounds that he was prepared to do so if same will allow the trial to proceed speedily.

After listening to arguments and counter-arguments from respective parties. Justice Aikawa in a short ruling held that in its opinion, the prosecution was permitted to abandon the said paragraph of the affidavit.

The court, however, held that it would hear the various applications by the defence, after which it will deliver its ruling immediately.

The court consequently, adjourned the case until May 31 for hearing.