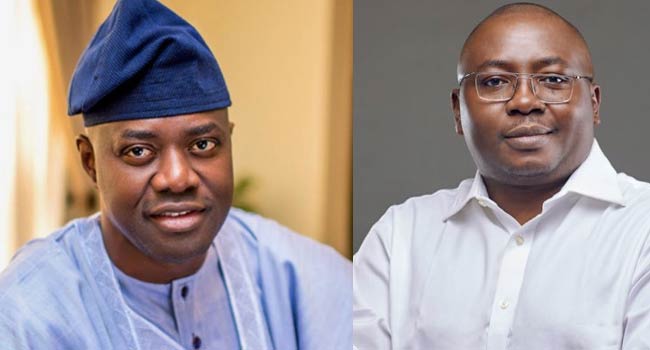 The Court of Appeal sitting in Ibadan has affirmed the victory of the Peoples Democratic Party (PDP) governorship candidate in the state and validated the appeal of the All Progressives Congress (APC).

The court of appellate jurisdiction says it disagrees with the tribunal judgement on grounds that the documents submitted were not properly processed while the evidences submitted by the appellant  was not adequately evaluated.

It further stated that this however does not give sufficient grounds to tamper with  the victory of Seyi Makinde as declared by the Independent National Electoral Commission (INEC).

The Court of Appeal also ordered that status quo before the tribunal’s judgment should remain, which is the return and declaration of Makinde as winner of the March 9,2019 governorship poll in Oyo State.

The court held that if not for time, it would have ordered a re-trial at the tribunal, noting that unfortunately, the time limit of 180 days for tribunal had been exhausted.

The Court of Appeal found that the judgement of the lower tribunal  that dismissed Adebayo Adelabu of the APC’s petition against Makinde’s election as the governor was perversed and therefore set the judgement aside.

Electoral Act allows a grace of 180 days for the petition to be heard at the tribunal, which affirmed that the tribunal duly spent her time and so nothing could be done on their pronouncement as to the validity of the election.

Three of the four-person panel of the Court of Appeal resolved 3 major  issues in the favour of the appellants. But there was a dissenting judgment from a judge with a proviso that the panel could not nullify Makinde’s election.

“We have not seen the details of the judgment. We were all in court and you (journalists) saw that the details were not read to us. As far as we are concerned, there is no cause for alarm.”

Fielding questions from reporters on the implications of the judgment of Governor Makinde, Jegede said: “There is no implication on the return and declaration of Seyi Makinde as the governor of Oyo State.”

Counsel to Adelabu and APC, Adeboye Shobanjo, also told journalists: “You listened to what my lord said about the evaluation of judgment of evidence that when there are evidence before the court, the evidence of all parties before the court should be evaluated. Judgment should not be based only on the evidence of a party in a case and if that was done during the trial,  or during the judgment, that is contrary to the provision of the constitution on fair hearing.

“In totality, the appeal was allowed. But my lord said that because of effusion of time, that since the time for trial has lapsed at the tribunal, they cannot order for retrial of the case.

“But generally or totally, the appeal was allowed. It showed that the judgment of the tribunal occasioned miscarriage of justice against the appellants.”

When asked to comment if Adelabu wnd APC would proceed to the Supreme Court, Shobanjo simply said: “The next step depends on my clients. They will brief us accordingly and it depends on instructions.”

Meanwhile, the APC in Oyo State has reaffirmed its strong belief in the judiciary as the pillar of hope for the sustenance of democracy, saying Adelabu and the party would approach the Supreme Court for final settlement of the litigation.

While reacting to the judgment through a statement issued by its Assistant Publicity Secretary, Prince Ayobami Adejumo, Oyo APC lauded the Appellate Court’s Judges for their pronouncement which validated the claims of the plaintiffs in the matter before it but “regretted that the good people of the state would still have to wait for the final adjudication on the case before our candidate could reclaim his mandate.

“The verdict given on Monday was unambiguous, apt and sound enough to convince any informed mind about the genuineness of our claim that Makinde’s declaration as the winner of the March 9 poll was done by INEC in error. The results announced were ridiculously inflated and there is no way such conspiracy could stand the test of proper scrutiny as this was just confirmed by the Appellate Court

“While we use this opportunity to salute the court for living up to its responsibility as the last hope of the common man, we are appealing to the good people of the state including Oyo APC faithful and other key stakeholders to remain calm and resist being provoked, in whatever way or form, by the PDP government and its agents who are apparently occupying the Agodi Government House on a borrowed time.

“Obviously, the next line of action is for us as a Party and our gubernatorial hopeful to approach the Supreme Court for perfection of the landmark verdict delivered by the Court of Appeal today and, by the special Grace of God, we shall obtain favorable judgment from the Apex Court as only this would lend credence to the fact Nigeria’s democratic practice is premised on free and fair elections as well as the rule of law.”

Why We are at Supreme Court, by 36 Governors