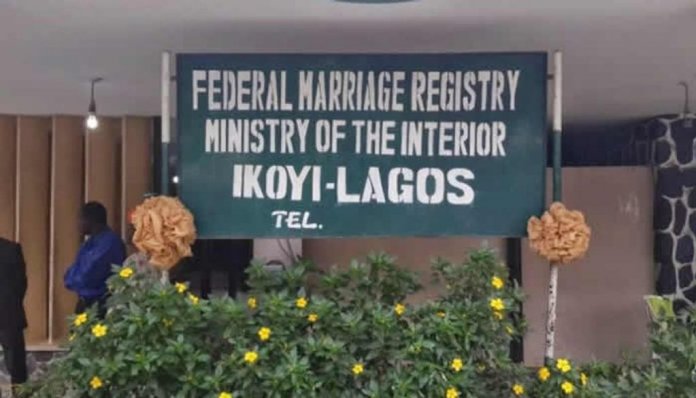 The Association of Local Governments Marriage Registrars of Nigeria has accused the Federal Government of disobeying an order of the Federal High Court which stated that the third tier of government had the constitutional right to register marriages.

The body said the Ministry of Interior misled Nigerians in a recent publication in some national dailies, stating that a statement credited to Mrs Georgina Ehuria, the Permanent Secretary in the ministry was unacceptable.

The permanent secretary had said the Item 7 to the Fourth Schedule to the constitution merely required the local government councils to maintain registries for registration of births, deaths and marriages for record purposes and planning alone.

But addressing a press conference in Abuja on Thursday, the ALGMRN President, Deji Shokeye argued that section 30(1) of the constitution and paragraph 1(i) of the Fourth Schedule to the constitution gave LGAs the exclusive jurisdiction to register marriages.

He called on President Muhammadu Buhari to call the Minister of Interior, Ogbeni Rauf Aregbesola and the permanent Secretary to order.

Shokeye stated, “It is quite surprising and even a flagrant disobedience to the decision of the Federal High Court concerning this matter in suit No: FHC/LCS/1760/16, in Egor LGA & 3 ors Vs. Minister of Interior & Anor, which reaffirmed the earlier decision by the same court in suit No: FHC/L/870/2002 in Haastrup & Another vs. Eti Osa Local Govt & 2 others where the court held that it was in the past that power to issue or grant licences was within the exclusive power of the Ministry of Internal Affairs, now Ministry of Interior.”