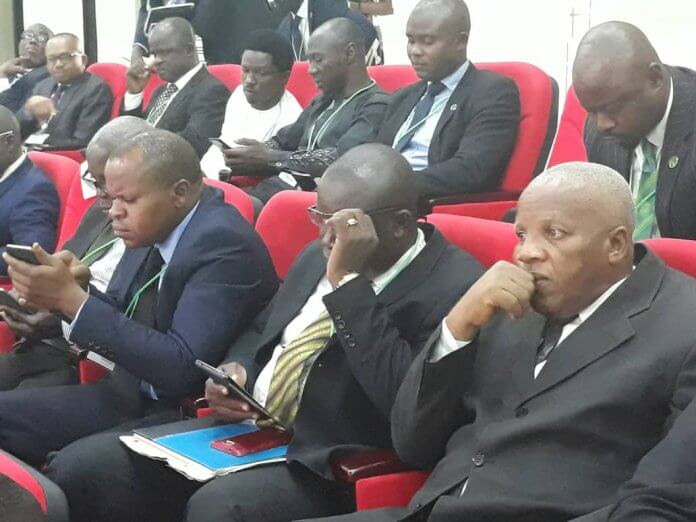 Many expressed satisfaction with the NEC meeting style noting that it has curbed distractions and reduced costs. “The NEC is a complete departure from what the NEC meeting used to be. The meeting has held for a third time now under President Usoro SAN at the same venue, NBA National secretariat contrary to the time when the meeting was rotational and sponsored by State Governors who also took time to attend both the opening and closing ceremonies. In addition, attendance to NEC has become strictly restricted to members while documentations have also become fully electronic” one of the Chairmen who wished not to be mentioned noted.

The Chairman of NBA Idah branch Mr. John Okpanachi , described the meeting as “Excellent”. He noted that the pattern introduced by Mr. Usoro has reduced cost. In his words: “I would use the word Excellent, in the sense that this method has really reduced cost. Entrance card has been printed permanently. Meeting materials sent to members electronicly. NEC used to be like a Jamboree but now we are cutting cost and it is impressive. Food was enough. Also worthy of commendation is Mr. Usoro SAN’s mastery and control of the meeting. He has a deplomatic way of handling things and carried everyone along. My only area of concern was in the nomination of co opted members. The appointment procedure has been set out but they were appointed without the knowledge of the branch Excos. This would have been necessary because some of them are not committeed to branch activities. However to remedy this, he can encourage the nominees to go back to their branches and ask about their welfare.”

For Chukwuka Ikwuazom, NBA Chairman Lagos, he is trilled by the fact that NEC meeting has become business like. He also commended the achievement of the paperless meeting but noted that there is still room for improvement.

Mr. Felix Ashimole popularly known as Che Oyinatunba also commended the introduction of the paperless NEC but noted that members attendance was poor. He observed that some of the attendees only came to write their names and return to their hotel rooms. He suggests that attendance should be taken at the middle of the meeting. On the low turn out Mr. Ashimole said it may not be unconnected with the non rotational venue now adopted and the fact that there is no more grove and excitement. He also faulted the accommodation arrangement and urged that the welfare should be more efficient.

Mrs. Eno-Obong Akpan, applauded the business like manner the NEC has taken. She said that the invitation of State Governors to the opening ceremony of NEC meeting was a big distraction. She also prefers the option of holding the NEC in one venue. She however observed that regardless of the the introduction of the paperless NEC, few copies of the NEC papers may be printed for those who are used to hard copies.

In the overall, many of the attendees expressed satsifaction with the present style of NEC and urged that more improvements should be made on few areas where lapses were identified.