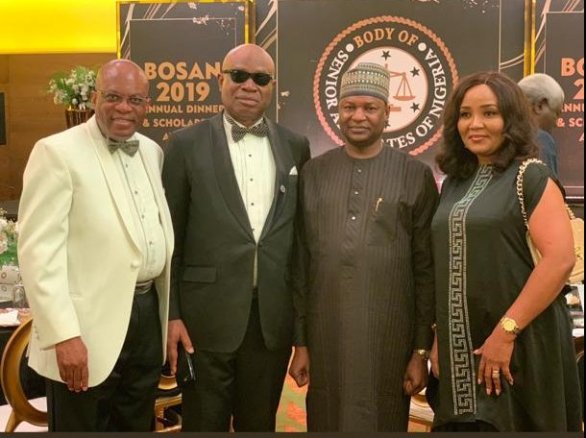 The Body of Senior Advocates of Nigeria (BOSAN) have awarded the sum of N500,000 scholarship to five students drawn from five law faculties in Nigeria. The award marks the beginning of the BOSAN Scholarship Scheme which is aimed at rewarding excellence and promoting high moral and ethical standard among law students in Nigeria Universities.

Explaining the process of selecting the five recipients, the Chairman of the BOSAN Scholarship Sub committee Mr. Dele Adesina SAN noted that the nominations were made by the various universities upon request by the Committee. He stated that a total of 90 Universities with law faculty were asked to nominate 400 level students with CGP of not less than 4.5 on the scale of 5.00 or its equivalent who have also demonstrated high level of ethical standard and leadership qualities. He stated that only 16 Universities responded to the request with a total of 85 students out of which the five candidates were selected after a written and oral interview.

The Chairman of the BOSAN Scholarship Sub-Committee noted that the scholarship scheme hopes to set target that will inspire and motivate law students to aspire excellence.

The launching of the BOSAN Scholarship scheme was part of the agenda for the 2019 BOSAN Annual Dinner which was held at the Grand Ball  Room of Eko Hotel & Suites, in Lagos on the 30th of November, 2019.

Speaking during the Dinner,  the President of the Nigerian Bar Association (NBA), Mr. Paul Usoro, SAN welcomed members of the BOSAN and reiterated the essence of the gathering which he noted is for the purpose of welcoming newly elevated Senior Advocates of Nigeria and the award of the BOSAN scholarship.  He added that the NBA considers BOSAN as an integral component of the NBA which it will continue to tap from. He further noted that some of the greatest resources of the legal profession are in BOSAN. The Attorney General of the Federation Mr. Abubakar Malami, SAN, delivered a goodwill message while the keynote address was delivered by Dr. Christopher Kolade, CON, Former High Commissioner to the United Kingdom.

“Ask a Lawyer” to Hold End of Year Conference and Dinner