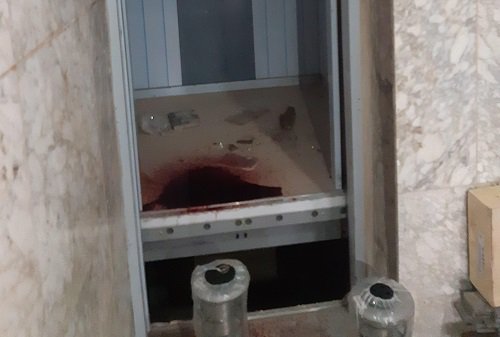 There was panic among staff of the Edo State High Court as a 65-year old man identified as Moses Airhiagbonkpa fell to his death.

The incident disrupted activities at the court and staff left their offices to see the corpse.

It was learnt that the deceased fell from the 10th floor of the High Court building.

The body of the victim was discovered when staff saw blood dripping down the empty lift and his feet dangling.

An official of the court who pleaded anonymity debunked the insinuation that the deceased was one of the workers engaged by the construction firm carrying out renovation of the court.

The official explained that the deceased was at Court 10 at the last floor for a community case.

He said the deceased went to urinate and didn’t asked for directions but went through a door he thought was the toilet and fell to his death.

“We used to have a lift that has gone bad and this administration is fixing it. The company carrying out the renovation work removed the old lift and is still working on it.

“We were told the man came to Court 10 and wanted to ease himself. He went to where the lift is and fell through.

“The MD of the contractor said there was a ribbon indicating no passage but that I cannot say anything about.”

A relative of the deceased who gave his name as Johnson Obanor, said they came from Ugiekhue community for a case.

Johnson explained that they were inside the court room waiting for their lawyer to get a new date since the court was not sitting when late Moses went out to ease himself.

According to him, “It was Moses that gave the Lawyer money. After we waited for him, we went down to our car and didn’t find him.

“We called his line severely but he was not picking. Later we saw people moving somehow and we decided to follow them. They said a construction worker fell but we told them he came with us.”

A nephew of the deceased, Osasu Isoken, said he went to check and there was no sign indicating that the place is a no go area

“There is no sign that the place is bad if not my uncle would not have entered.”

As at press time, efforts were being made to convey the corpse to the mortuary.

Policemen were seen around questioning staff.