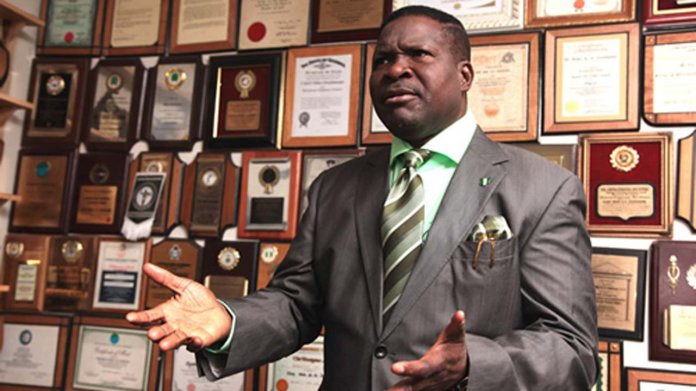 A constitutional lawyer and human rights activist, Chief Mike Ozekhome (SAN), has described the suspension of the CJN by President Muhammadu Buhari as the most despicable, ultra vires, undemocratic and brazenly unconstitutional act ever carried out by any government in Nigeria, civilian or military since January 1, 1914.

He noted that the desperate act of the President constitutes a direct suspension of the Nigerian Constitution and the entire democratic process.

According to Ozekhome: “The action has finally removed the remaining veneer of pretension to democratic credentials by Buhari and his all-conquering cabal.

“Welcome Nigerians to full blown dictatorship, absolutism, authoritarianism and fascism. Buhari has behaved worse than what he was as a military tyrant.

“Military juntas always only suspended parts of the Constitution they did not like but by suspending the entire judiciary, rule of law and due process, including four valid High Court/Federal High Court rulings and yesterday’s ruling by the Court of Appeal, all of them staying proceedings of the phoney and funny charges levelled against Onnoghen before the CCT, Nigerians now know that we have become an endangered specie. “It means that the next election is nothing more than a ritualistic outing to illegally confer life presidency (not just four years) on Buhari.

“There is no known basis, legal constitutional or moral to hurriedly bypass courts of law, the judicial process and court orders to illegally remove the CJN and swear in an Acting CJN.

“The provisions of section 292(2) of the 1999 Constitution are quite clear on how the CJN can be removed from office. Aside Sections 153,158 and parts 1 and 2 of the 3rd schedule to the Constitution which provide that a judicial officer can not be removed from office until he has first been tried and dealt with by the National Judicial Council (NJC), Section 292(2) makes it clear that the President can only remove the CJN from office before the age of his retirement,” acting on an address supported by two-thirds majority of the Senate.

“When did the Senate meet to donate this power to the president? The president has illegally and unconstitutionally stripped both the judiciary and the legislature bare of their constitutional functions, usurped their powers and enthroned maximum dictatorship over the affairs of Nigeria, like Louis X14 once did when he stood in front of parliament, beat his chest imperiously and declared,”l’est tat c’est moi”(I am the state).

“The ill-advised action does not only assault our noble sense of humanity and dignity as decent Nigerians, it also violently desecrates the principles of rule of law as espoused by Prof A.V. Dicey and the hallowed doctrine of separation of powers as ably propounded in 1748 by the great French Philosopher, Baron De Montesque.”

Ozekhome therefore called on Nigerians to brace up and protest “against this illegality.

“We are back to full Abacha era as Chief Olusegun Obasanjo rightly noted three days ago in his patriotic letter to Nigerians.

“Nigerian lawyers and the NBA should shut down all courts in Nigeria until the CJN is returned to his seat. This was achieved even under military dictatorship in Pakistan, when former Pakistani president, Pervez Musharraf illegally removed from office, the then Chief Justice of Pakistan, Justice Iftikhar Mohammad Chaudhry on 11th March 2007.

“All the lawyers went on strike, from 15th March 2007, shut down the courts and protested on the streets for months, until a panel of seven members of the Supreme Court sat and held that the removal was illegal and reinstated the Chief Justice.

“Nigerian lawyers should act now. The NASS should also shut down in protest and allow Buhari and his cabal have their jolly ride over cowed, hapless, vanquished and conquered Nigerians.

“There is no more democracy in Nigeria. It is as dead as dodo. The coming presidential election is but a mere charade to confer legitimacy on a pre-rigged, on-the-spot rigged and post-rigged election. The pretentious chicken has finally come home to roost.

“This latest act is a big scandalous shame on the Buhari government, assuming it still knows anything called shame.

“It has tainted it with the paint brush of odium obliquy and international derision. The international community should weigh in immediately to prevent Nigeria from burning”, he said.

By suspending Onnoghen, the National Chairman of the Peoples Democratic Party (PDP), Uche Secondus, alleged that “President Buhari and his ruling All Progressives Congress, APC, have concluded plans to plunge this country into a major crisis in frustration for their apparent inevitable rejection by Nigerians. President Buhari’s inclination to non-democratic behaviour is now apparent as he moves to muscle all other arms of government as well as ingredients of democracy. The agenda is not hidden, which is to truncate democracy rather than face the Nigerian electorate.”

To another Abuja-based Senior Advocate of Nigeria (SAN), Gidado Maxwell, the action is shocking.

He said: “There is no place in Nigerian legal system for the head if one arm of government to suspend another. It is unconditional and it is a negation of the Nigerian law. It is not done anywhere. That action is illegal and unconstitutional and it should be challenged in court.

“Recall what happened between former President Olusegun Obasanjo and Alhaji Atiku Abubakar. Obasanjo wanted to remove Atiku from office but he went to court to challenge it because the constitution does not allow the President to remove the Vice. They came in together and they have to leave together.

“The matter went to court and at the end of the day, the Supreme Court ruled that he cannot be removed.

“In the same manner, the CJN is being challenged and disgraced and it is going to tarnish his record. There is a constitutionally laid down process of removing the CJN, which must get the approval of the Senate.”

Also speaking, Victor Ozegbena described the development as shocking, adding: “I will tell you that I was shocked because that is not the position of the law.

“The position of the law in Section 292 of the Constitution that following the recommendation of the National Judicial Council, they must wait for the approval of two/third majority of the National Assembly, especially the Senate.

“But this removal is not in line with either the recommendation of the NJC or the approval of the Senate. I don’t know which law the President would have held unto to have done this.”

He saw the acceptance of the newly sworn in Acting CJN, Mohammed, as a betrayal of the judiciary and expressed surprised that he should accept to be sworn in illegality.

“What is unfolding now is something we have to wait to see how it is going to be because as far as I am concerned, the law and the judiciary are being put to test.

“This is a litmus test because the pace with which all the actions are unfolding is shocking.

“We will see the end of it, especially as the elections are around the corner. The huge challenge is that the constitution is being set aside,” he said.

The ordeals of the embattled CJN began with a petition over his alleged false assets declaration.

Before the suspension, the Court of Appeal has granted order restraining all actions at the Code of conduct Tribunal pending outcome of the motion. The court had also adjourned the matter till next Wednesday for ruling.

On his part, former minister of Aviation, Mr. Femi Fani-Kayode, said: “When I warned my colleagues in the opposition that we were dealing with a fascistic monster in Buhari, they did not believe me, they laughed me to scorn and accused me of being an alarmist. Well I doubt they are laughing anymore.

“For a President in a democracy to suspend the CJN is totally unacceptable, a clear breach of the rule of law and the constitution and a manifest violation of the principle of separation of powers. If anyone thinks that we are practising democracy in Nigeria that person needs to have their heads examined.

“The result of the February 16th election has already been determined and Buhari will declare himself President for life.

“I call on the Senate President and the Speaker of the House to stop playing games to show courage and to begin impeachment proceedings against Buhari.

“That is the only way to stop this man from totally destroying our country and leading us to a civil war that may never end.”
Mr. Yinka Odumakin in his reaction said the CJN suspension is illegal.

According to him, “The attention of Southern and Middle Belt Leaders has been drawn to a coup against Constitutional Democracy in Nigeria by President Muhammadu Buhari by the suspension of CJN Walter Onnoghen and swearing in of a replacement.

“This is a constitutional crisis foisted by desperation and morbid desire to foist rule of thumb. We have checked through the constitution and the President has no power to unilaterally suspend the CJN.

“Section 292 of the amended 1999 Constitution is clear that the President can only remove the CJN with 2/3 of Senate resolution. To us, what has been done is resort to self-help after the Court of Appeal issued an order stopping the trial of the CJN by the CCT presided over by a man answering charges in court over corruption allegations but still in office.

“The latest action is a clear suspension of the constitution and enthronement of full blown dictatorship. We reject the illegal suspension”

Constitutional lawyer, James Ezike, queried the timing of the action. Ezike, who was a personal lawyer to late Dim Emeka Ojukwu asked; “why must all these things be done while election is less than a month.”

He also queried why they are now fighting judges and frightening the judges, saying it was aimed at influencing the judgment of the election tribunal.

As, the national President of Committee for the Defense of Human Rights, CDHR, Mr. Malachy Ugwummadu said the action was administrative and unknown to law as contemplated under section of 292 pertaining the removal of judicial officer of the office of the Chief Justice of Nigeria.

He stressed that since the heart of justice is based on notion of justice, the action has opened room for judicial challenge by CJN legal team.