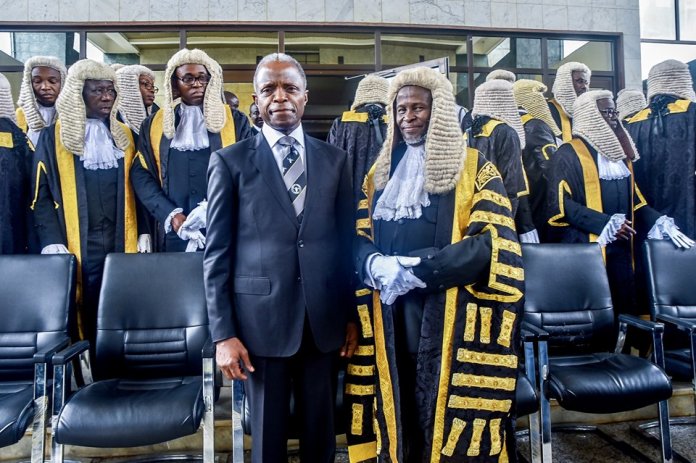 The Chief Justice of Nigeria, Justice Tanko Muhammad, on Monday, made only a veiled reference to his predecessor, Justice Walter Onnoghen, whose career, came to an abrupt end under controversial circumstances earlier this year.

Onnoghen faced an unprecedented criminal trial of an incumbent CJN which saw to his exit from office.

Justice Muhammad said on Monday that the “events”, without giving particulars, shook the Nigerian judiciary to its foundation.

Justice Muhammad was speaking at the special court session marking the new 2019/2020 legal year and the swearing-in of new 38 Senior Advocates of Nigeria.

The similar event which ushered in the just concluded previous 2018/2019 legal year was presided over by Justice Onnoghen in 2018.

Speaking of the circumstances leading to his emergence as the acting CJN in January, an indirect reference to the circumstances that saw to Onnoghen’s exit, Justice Muhammadu said, “I was appointed in the acting capacity in the course of the year after the unfortunate events that shook the Nigerian judiciary to its very foundation.”

He became the acting CJN when President Muhammadu Buhari suspended Onnoghen based on a controversial ex parte order issued by the Code of Conduct Tribunal in January.

Onnoghen was subsequently charged before the CCT and was eventually convicted in April, with the tribunal ordering his removal from office and barring him from holding public office for a period of 10 years.

The erstwhile CJN was however allowed to voluntarily retire by the President following the National Judicial Council’s recommendation.

Speaking at his largest public ceremony since he became the judiciary’s numero uno, Justice Muhammad did not mention his predecessor’s name in his 18-page speech but only skirted around the circumstances that saw to the exit of the immediate-past CJN.

Speaking of the last legal year’s events, Justice Muhammad said, “Though the journey cannot be said to be smooth, the good thing is that it has been favourably adventurous.”

In what seemed to be another reference to the Onnoghen crisis, the CJN said, “At the commencement of the 2018/2019 legal year, it was as if the year would take a much longer time to end in view of fussillade of events that beclouded that particular phase of the Nigerian judiciary.”

He, however, expressed gratitude to Almighty God that “We have been able to weather the storm, stabilised our sail.”

He added, “I can assure you that our ship is on a steady cruise to success and prosperity.”