Home News Communique Issued by Muslim Lawyers at the End of Their 12th Annual... 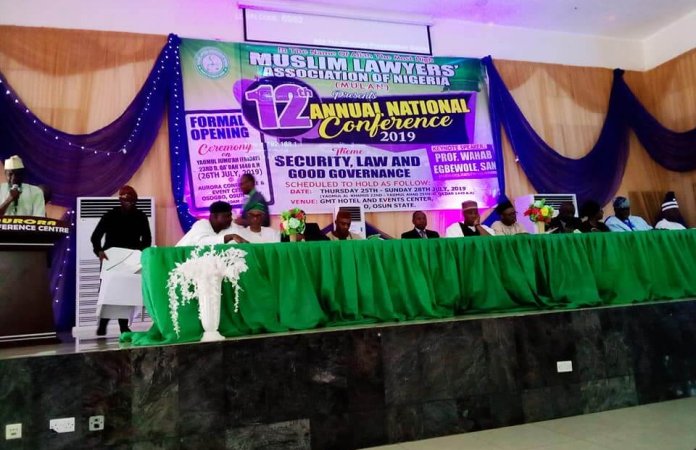 Insecurity of lives and property, poor economic polices, smear campaign against Muslims, incessant harassment of Hijab wearing female Muslims and many more topped the discussion at the recently concluded Annual National Conference of the Muslim Lawyers’ Association of Nigeria (MULAN) which was held between 25th to 28th of July 2019 at the GMT Hotel and Events Centre, Osogbo in Osun State.

The 2019 Annual Conference which was declared open by Hon Justice Justice Olukayode Ariwoola, JSC had as its theme “Security, Law and Good Governance” with the keynote address delivered by Professor Wahab Egbewole SAN of University of Ilorin,

At the completion of the Conference, MULAN issued the below communique:

The 12th Annual National Conference of the Muslim Lawyers’ Association of Nigeria was held from 25th to 28th of July 2019 at the GMT Hotel and Events Centre, Osogbo in Osun State. The opening ceremony was chaired by Hon. Justice Olukayode Ariwoola, JSC, while Professor Wahab Egbewole SAN of University of Ilorin delivered the Keynote address on the theme of the Conference: “Security, Law and Good Governance”. The occasion was well attended by dignitaries from within and outside the bar and the bench. At the Conference various salient issues of national concern were discussed and following decisions reached: