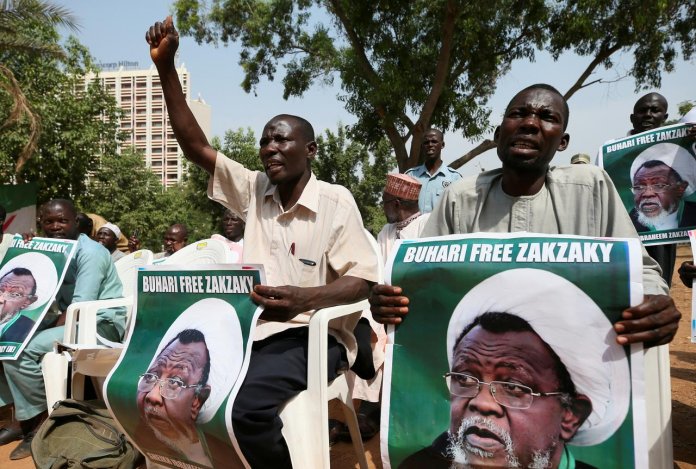 The Federal Government has obtained a court order to proscribe the  Shiites’ organisation formally referred to as the Islamic Movement in Nigeria.

The Federal High Court in Abuja on Friday ordered the proscription of the Shiites’ movement as protests by the Islamic organisation rock Abuja.

Saturday PUNCH reports that Justice Nkeonye Maha issued the order in a ruling in which  she also designated the activities of the Shiite organisation in any part of Nigeria “as acts of terrorism and illegality.”

The court restrained “any person or group of persons” from participating in any form of activities involving or concerning the IMN “under any name or platform” in Nigeria.

To complete the process of the proscription of the group, the court ordered the Attorney-General of the Federation “to publish the order proscribing the respondent (Islamic Movement in Nigeria) in the official gazette and two national dailies.”

The judge gave the order following an ex parte application by the Federal Government.

A copy of the ex parte application marked FHC/ABJ/CS/876/2019 which was sighted by Saturday PUNCHon Friday, was filed in the name of the ‘Attorney-General of the Federation.’

Justice Maha granted the four prayers contained in the application shortly after the Solicitor-General of the Federation and Permanent Secretary, Federal Ministry of Justice, Mr Dayo Apata, argued the application on Friday.

The IMN was the sole respondent to the application but the group was not represented by a lawyer on Friday since it was an ex parte hearing.

Ruling on Friday, the court made “a declaration that the activities of the respondent (Islamic Movement in Nigeria) in any part of Nigeria amounts to acts of terrorism and illegality.”

The court said, “An order of this honourable court proscribing the existence and activities of the respondent (Islamic Movement in Nigeria) in any part of Nigeria, under whatever form or guise either in groups or as individuals by whatever names they are called.

“An order restraining any person or group of persons from participating in any manner whatsoever in any form of activities involving or concerning the prosecution of the collective intention or otherwise of the respondent (Islamic Movement in Nigeria) under any other name or platform howsoever called or described in any part of Nigeria.

“An order directing the applicant (the AGF) to publish the order proscribing the respondent (Islamic Movement in Nigeria) in the official gazette and two national dailies.”

The Federal Government had filed the application before the court on Thursday, barely 72 hours after a protest by members of the group in Abuja led to a bloody clash between them and the police.

The Deputy Commissioner of Police in charge of Operations, Federal Capital Territory Command, Usman  Umar, and a Channels Television journalist, Precious Owolabi, died in the clash with many others injured and property destroyed.

The Shiites have for over two years been regularly taking to the streets particularly in Abuja to demand the release of their leader, Sheikh Ibrahim El-Zakzaky, and his wife, Zeenat.

The couple has been in the custody of the Department of State Services since December 2015 after a bloody clash between members of the group and soldiers in the convoy of the Chief of Army Staff, Lt.-Gen. Tukur Buratai, in Zaria, Kaduna State.

In the application for the proscription of the group, the Federal Government accused the group of carrying out coordinated violent protests in the country.

It alleged that the “aggressive activities” of members of the group had led to the loss of lives and destruction of private and public property in the Federal Capital Territory and other cities in northern Nigeria.

The Assistant Commissioner of Police in charge of Operations in the FCT Command, Nyinnaya Adiogu, who deposed to the affidavit filed in support of the application, also alleged that the Shiites engaged in series of illegal activities,  “which are inimical to the corporate interest of the Federal Republic of Nigeria.”

Such activities, according to Adiogu, who said he was briefed by the Inspector-General of Police and the Solicitor-General of the Federation included setting up of a para-military guard called ‘HURRAS’.

The group was also accused of “nefarious activities”, murder, attacks on security agents and provocative preaching and hate speeches while working towards an agenda of creating an Islamic State in Nigeria.

The affidavit, which highlighted what it described as “series of violent and unlawful activities” of the group since 1991, stated that the activities of the IMN members under the guise of clamouring for the release of their leader had not only heightened tension and insecurity in the country but also earned the country negative rating globally.

The affidavit stated in part, “On July 22, 2019, the respondent’s members again launched another vicious cycle of violent protests around the Federal Secretariat (Abuja), during which they set a sub-station/Ambulance Bay of the National Emergency Management Agency, containing a truck and an ambulance on fire.

“A Deputy Commissioner of Police, Usman Umar, in charge of Operations in the FCT; a national youth corps member by the name of Precious Owolabi, reporting for Channels TV and others were killed by the protesters. (Copies of media reports by The Nation, Daily Trust, Leadership, Punch and The Sunnewspapers dated July 23, 2019, on this incident are attached herewith and marked as Exhibit FGN 4A, 4B, 4C, 4D and 4E).

“The violent and aggressive activities of the members of the respondent under the guise of clamouring for the release of their leader have not only heightened tension and insecurity in the country, but it is also earning the country negative rating globally.

“Both the US and UK governments have already issued travel warnings on Nigeria on account of these violent protests which are equally deleterious to foreign investments. (A copy of the above report by ThePunch newspaper is attached herewith and marked Exhibit FGN 5).”

The affidavit also stated the “nefarious activities” of the group, to include, “unauthorised blocking of public highway (especially the Zaria-Kano Highway during their processions), engagement in illegal road traffic functions, illegal roadblocks, imposition of illegal curfews and checkpoints, raids on police posts, prevention of arrest of their members, invasion of court premises to abort legal proceedings involving respondent members, refusal to submit to ordinary security checks, and attacks on security agents which led to the death of Corporal Dan Kaduna Yakubu;

“Setting up of a para-military guard known as ‘HURRAS’ through which the respondent has been terrorising local residents; respondent has also instituted unregistered security outfits and performed paramilitary ceremonies, hoisting of flag, combat exercises, parades and inspection by the respondent leader reminiscent of state authority.

“Provocative preaching and hate speeches aimed at inciting members against non-members while working towards its agenda of creating an Islamic State in Nigeria.

“Brazen acts of disrespect of Nigerian laws and non-recognition of constituted authorities, refusal to operate within the ambit of the law, failure to register with the appropriate authorities.”

The affidavit also recalled the clash between Shiites and soldiers in the Chief of Army Staff’s convoy in Zaria on December 14, 2015.

It recalled similar clashes between members of the IMN with “security forces in Kaduna” in 1991, and another incident in 1996 when the members of the group allegedly “seized and decapitated a Christian, alleging that his wife used pages from the Quran to clean their baby.”

It also alleged that in June 2005, the group “clashed with emirate authorities in Sokoto over access to the city’s central mosque.”

It alleged that in July 2007, the group “murdered” a Sunni cleric in Sokoto, Umar Dan Maishiya, “for being highly critical of Shiites.”

It added as part of the group’s unlawful activities that the activities of the respondent’s members in Gyallesu, Zaria and environs have been threatening the peace and security of the affected areas over the years.

“Constant conflicts with local communities and forceful takeover or appropriation of mosques not belonging to the respondent in Kaduna and Kano states as well as other northern states.

“Violent protests, creating ethnoreligious strifes and other criminal acts of aggression against individuals and communities which often results in deaths, grievous bodily harm and destruction of property.

“The respondent has over the years manifested its penchant for launching attacks on security agents.”

We won’t abandon our religion –Shiites

However, the spokesperson for the group, Ibrahim Musa,  said the government could not proscribe the movement, pointing out that its members were Muslims practising Islam as “revealed” by Prophet Muhammed.

He said the group was neither an association nor a political party that could be proscribed by fiat.

Musa, who spoke to Saturday PUNCH on Friday, noted that the IMN was a mass movement and could not be made to abandon its religion just like that.

Musa said, “Firstly, we are not an organisation or association or a political party that can be proscribed by fiat.

“We are Muslims practising Islam as revealed to Prophet Muhammed under the leadership of his family. Ours is a mass movement, hence we can’t abandon our religion just like that.

“We don’t bear arms, we don’t force others to join us, we are just demanding justice within the ambit of the law, therefore, proscribing us won’t work.

“We can’t say this is what we will do if we are proscribed, because it just won’t work. We are in each and every facet of life like other citizens.”

Three of our members died in police custody, Shiites claim

The IMN also said three of its members who were shot and held in police custody had died.

The sect explained that the deceased were arrested during Monday clash between its members and the police during which about 13 persons, including a deputy commissioner of police, died in Abuja.

The President, Media Forum of IMN, Musa, in a statement in Abuja on Friday, said the three detainees died as a result of bullet wounds they sustained during the incident.

The Federal Capital Territory police spokesman, DSP Anjuguri Manzah, could not be reached for comments as calls to his phone rang out. He had yet to reply to a text message as of the time of filing this report.