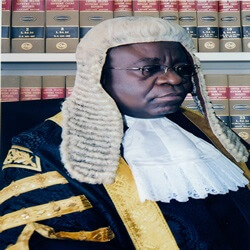 Three years after the invasion of his residence by Department of State Services (DSS) operatives, Supreme Court Justice John Inyang Okoro has been cleared of any wrongdoing or misconduct, The Nation has learnt.

While Justice Ngwuta was discharged by the Code of Conduct Tribunal (CCT), the National Judicial Council (NJC) cleared Justice Pindiga but recommended the compulsory retirement of Justice Tsamiya, Justice Ademola and the late Justice Umezulike.

Justice Auta was slated for prosecution over an allegation that he collected N197million from one Alhaji Kabiru, who wrote a petition to the NJC against him.

The DSS gave Justice Okoro back the cash in his house on November 8 after a three-year probe.

Besides, Justice Okoro was neither arraigned nor tried for corrupt practices.

He was “not confronted with any petition or complaint from any quarters whatsoever by the DSS.” Nothing incriminating was found against him, The Nation learnt.

A source, who spoke in confidence said: “The DSS has returned over $30,000 and other items recovered from Justice Inyang Okoro to him, the investigation has been concluded.

“The step taken by the security agency was a vindication of Justice Okoro, who many regarded in the Judiciary as incorruptible. It also demonstrated the fairness of the DSS in upholding the truth.

“Going by what the Justices went through, the clearance of Justice Okoro by the DSS is being celebrated at the bar and the bench.”

Investigation confirmed that many respected lawyers, among them SANs, have been pushing for a public declaration of Justice Okoro’s clearance by the DSS.

A source said: “the eminent lawyers believe since the public heard about Justice Okoro’s investigation, they ought to know the outcome.

“They are disturbed about the negative media propaganda which his arrest and investigation generated which affected his reputation.”

In an October 17, 2016 letter to a former Chief Justice of Nigeria, the Supreme Court Justice listed the items recovered by DSS operatives from his house.

These are: one iPad, three telephone handsets (only one is active), $38,800  N3.5 million, and four cheque books. The foreign currency was the “leftover from the sum of $24,000 and £10,000 a year he has received each of the previous three years as annual medical/vacation allowances. He explained that he had not spent more than £5,000 on each of three trips he made.

He added: “I was entitled to have more than the amount recovered from me. Put differently, My Lord, the money was the balance of my estacode received from this court for the past three years. This is quite outside the estacodes I have received for the International Conferences I have so far attended since joining the bench of this court.”

While the investigation lasted, Justice Okoro insisted that he had “always eschewed all forms of corrupt practices and never “received any bribe from anybody.”

It was the second time Justice Okoro will be absolved of alleged misconduct.

On August 15, 2011, he swore to an Affidavit on Facts which he submitted to a former President of the Court of Appeal, Justice Ayo Salami, on a botched attempt to compromise him as a member of Appeal Panel on the Sokoto State Governorship Election Petition in 2010.