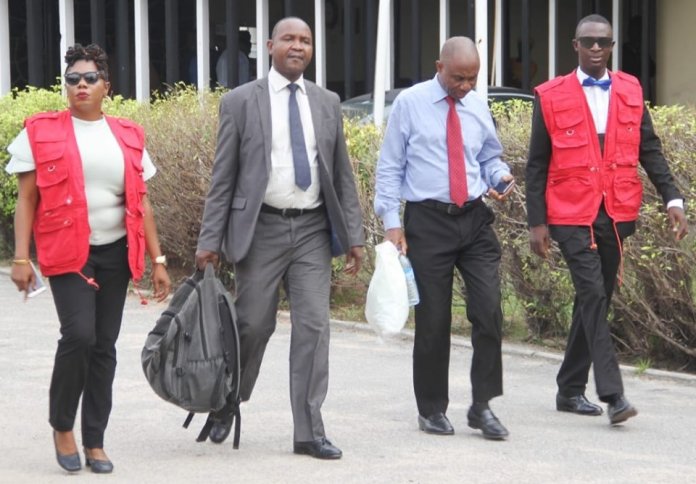 The Economic and Financial Crimes Commission, EFCC, Lagos Zonal office, on Friday, May 17, 2019, arraigned two legal practitioners, Tom Awhana and Paul Okoro, before Justice Mojisola Dada of the Special Offences Court sitting in Ikeja, Lagos on a 19-count charge bordering on conspiracy to steal and stealing to the tune of N192,436,342.30 (One Hundred and Ninety-Two Million, Four Hundred and Thirty-six Thousand, Three Hundred and Forty-two Naira, Thirty Kobo), belonging to a Law firm, Mogbeyi Sagay & Co.

They allegedly stole and converted the money to their personal use, while they were in the employ of the Law firm.

Awhana, was appointed the Head, Mogbeyi Sagay & Co., after the death of the founder, Mogbeyi Sagay, SAN, in 2012 by the consultant to the firm and brother to the deceased, Prof. Itse Sagay, SAN, Chairman, Presidential Advisory Committee Against Corruption, PACAC. He was also made the overseer of the Estate owned by the late Sagay and also a signatory to the firm and Estate.

However, having assumed the position, he allegedly secretly opened personal bank accounts in the name of Mogbeyi Sagay & Co. with First City Monument Bank, FCMB, Union Bank Plc and Heritage Bank and subsequently diverted funds and cheques drawn in favour of the firm.

One of the counts reads: “That you, Tom Ahwana and Paul Okoro, sometime between 2012 and 2013 in Lagos, within the jurisdiction of this Honourable Court, conspired to commit felony, to wit: stealing of the sum of N3,660,000.00 (Three Million, Six Hundred and Sixty Thousand Naira) property of Mogbeyi Sagay & Co.”

They pleaded “not guilty” to the charge when it was read to them.

In view of their pleas, the prosecuting counsel, Rotimi Oyedepo, asked the court for a trial date and further submitted that the “issue of bail is at the discretion of the court.”

Counsel to the first defendant, Oluwaseun Olusiyi, told the court of a bail application filed and served on the prosecution and urged the court to grant her client bail.

Olusiyi further told the court that a peaceful resolution of the dispute had been activated between the first defendant and the family of the late Sagay.

Counsel to the second defendant, Kingdom Ani, informed the court about a pending application for bail on behalf of his client.

Justice Dada admitted the defendants to bail in the term and condition that both defendants submit their international passports with the Court’s Registrar pending the hearing and determination of the charge against them.

While adjourning to June 4 and 25, 2019 for commencement of trial, Justice Dada, ordered that they should be remanded in prison pending the perfection of their bail conditions.