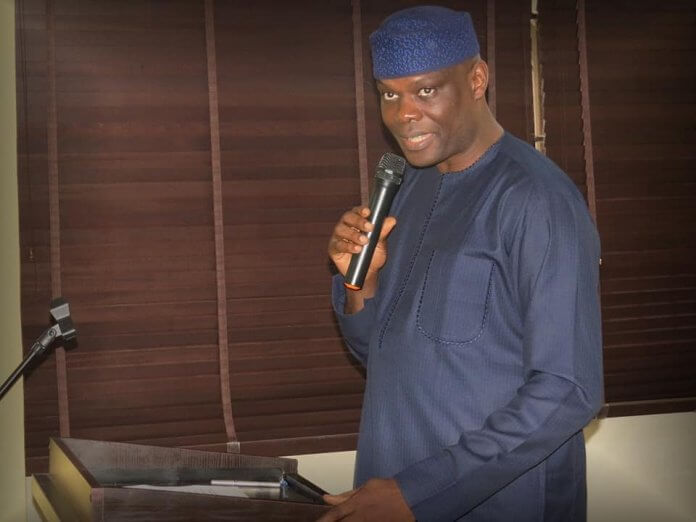 Ekiti State Attorney-General and Commissioner for Justice, Olawale Fapohunda, Esq. has called for synergy between his office, the Prisons, the Police and other Security Agencies as part of efforts to decongest the Prisons and ensure prompt dispensation of justice.

He made this call on Thursday 28 February, 2019 during a meeting with Security Chiefs at the Ministry of Justice (MOJ) Complex in Ado Ekiti. Fapohunda explained that the meeting was convened primarily to discuss and proffer solutions to prosecutorial challenges and prisons congestion. He noted that out of the 488 inmates currently in Ado Ekiti prisons, only 121 are convicts while the other 367 are awaiting trial persons.

Fapohunda stressed the importance of prompt remittance of case files to the Office of the Director of Public Prosecution (DPP) for proper legal advice.

He informed the Security Chiefs of the MOJ zero tolerance against arbitrary letters of discontinuance specifically as it relates to serious crimes such as rape, kidnapping and murder. Such applications according to him, are counter productive and detrimental to the goal of achieving effective prosecution of criminal matters.

The Attorney-General said that proper investigation of cases by the Police and correct handling of exhibits such as medical reports and confessional statements would enhance the work of the MOJ.

In his remarks, the Commissioner of Police, Mr. Asuquo Amba lauded the State Governor, Dr. Kayode Fayemi for his efforts in supporting the State Police Command.

He assured that pending case files would be forwarded to the Office of the DPP within seven days adding that completed police reports will expeditiously be forwarded from now on.

Assuring that only competent officers are posted to the Criminal Investigation Department (CID) for proper handling of cases, the Police Commissioner said that training and retraining would be organized for Policemen in the State towards ensuring best global practices in the task of maintaining public order and safety, enforcing the law as well as preventing, detecting and investigating criminal activities.

Also reacting to the Attorney-General’s remarks, the Controller of Prisons, Ekiti State Command, Mr. Akinyemi Afolabi agreed on the need for synergy between criminal justice agencies in the State to enhance prompt dispensation of criminal cases and that this would facilitate prisons decongestion.