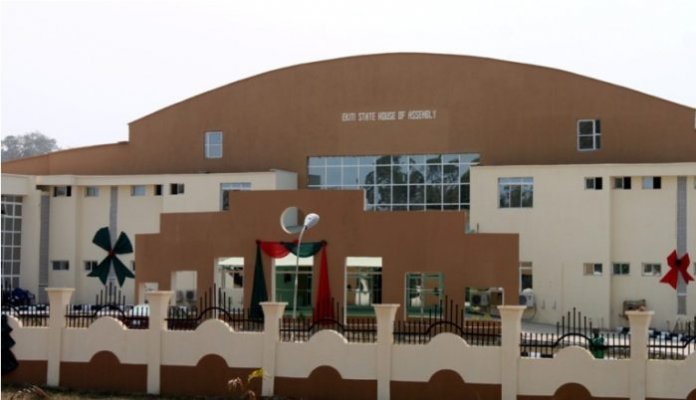 Ekiti State House of Assembly has passed into law the 2019 Board of Internal Revenue Service bill.

The passage of the new law, aimed at guiding tax policy and revenue generation is expected to be operational in the state soonest.

A report of the House committee on Finance and Appropriation was at a plenary adopted by the Assembly as a working document in respect of the operation of the State Revenue Board.

The committee Chairman, Hon. Olubunmi Adelugba, had during the submission of the report reeled out the recommendations, saying the new law would engender collaborative efforts among stakeholders through effective tax control system and formation of better policy for revenue generation in the state.

The Speaker, Hon. Funminiyi Afuye, while passing the bill into law through a voice vote, commended the committee for doing a great job, saying Ekiti needed to look inwards at this challenging time and generate more money in view of the dwindling revenues of the federal government.

The committee chairman, Adelugba, had said the new law as contained in the committee’s report would engender collaborative efforts among stakeholders through effective tax payment for more revenue that will be in the overall interest of the residents.

“It is high time the state enhanced its economic growth to realize   the agenda of Governor Kayode  Fayemi’s administration by opening up the state for economic activities and investments through  robust tax policy for more revenues.

“The proposed law would have direct and indirect impacts on the citizens and make individuals live above poverty. It would also serve as a veritable tool to making government more committed to human capital development”.

Adelugba, who is also the Chief Whip, also called the attention of the House to flooding being experienced in some towns, especially in Emure community since the commencement of the raining season.

Federal Government to Partner Nigerian Bar Association on Justice For...

Unreasonable Hike in the Cost of Filing Fees –...