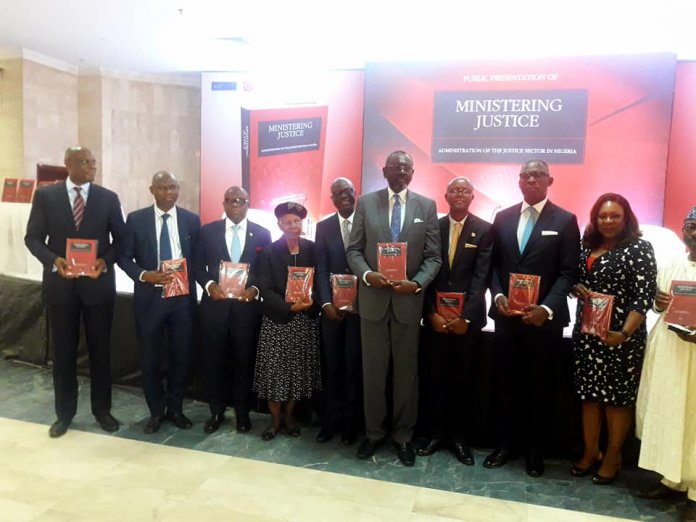 The Ekiti State Attorney-General and Commissioner for Justice, Mr. Olawale Fapohunda has called for a proper implementation of the report of the Presidential Committee on the Review of Judicial Salaries and Allowances.

Mr Fapohunda who made this call as the keynote speaker at the public presentation of the book ”Ministering Justice” authored by Olasupo Shashore (SAN) and Dr Akeem Bello, said it has become essential to review judicial salaries to eliminate the temptation of corruption as well as to boost public trust in the judicial system.

Noting that judicial officers have been on the same salary structure for more than 10years, Fapohunda said that the report of the Presidential Committee indicated that while the Federal Government reviewed the salaries and allowances of Public Servants and Political office holders in 2000, 2005, 2007 and 2011, making it four times between May 1999 and March 2011, the salaries of judicial officers were however only reviewed twice during the same period. He stressed that ”judicial salaries must be set at a comparatively high public-service level to remove both the temptation of corruption and public suspicion of the possibility of such temptation”.

The Attorney-General described the position in some quarters that judicial officers who are unable to survive on their respective meager salaries should resign from the bench as ridiculous and unrealistic adding that ”it is also self-defeating to continue to preach integrity on the bench without removing the temptations that comes with poor condition of service”.
”While I agree that there can be no justification for any form of judicial corruption, I am unable to accept that to serve on the bench is a call to national service and penury”, he said.

Fapohunda stressed that a conducive condition of service and financial security of judicial officers would lead to judicial independence to the benefit of all stakeholders.

Commenting on the suspension of Justice Walter Onnoghen Fapohunda, expressed hope that the justice sector would not return to business as usual but finally commence the long overdue task of undertaking far reaching reforms.