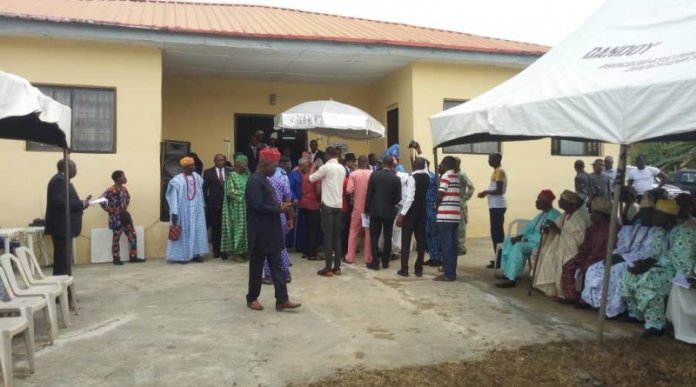 Ekiti State Chief Judge, Justice Ayodeji Daramola, has commended Ekiti State Governor, Dr. John Kayode Fayemi, for his efforts in providing the platform that has helped the judicial arm of government of the state to function properly and unhindered.

Justice Daramola, called on the people of Ilawe-Ekiti, in Ekiti South West Local Government to make said the use of the new court in their domain and be ready to defend and protect the facilities from vandals and criminal minded people in their environment.

He  described court as a veritable forum of peaceful resolution of disputes, urged the people  to make use of the court as appropriate at all time.

Daramola, made the remarks on Wednesday, at the commissioning of the ilawe-Ekiti Judicial Division of Ekiti State High Court, adding that the idea behind having all these courts is to bring justice nearer to the people.

Justice Daramola, noted that the court: “Ilawe Ekiti Division will service not only Ilawe community but all the other communities in Ekiti South-West Local Government Area”.

According to him, Ekiti State Governor, Dr. Kayode Fayemi, is a firm believer in the rule of law and in making justice sector function effectively.

This is yet another fulfillment of the policy of the present administration in bringing justice nearer to the people of Ekiti State.

In his speech at the opening/ commissioning of the new Judicial Division of the High Court of Justice of Ekiti State, the Alawe of Ilawe-Ekiti, Oba Adebanji Ajibade Alabi, (Afuntade 1), said only a fearless judiciary which is the last hope of the common man can save, restore and foster peace, good government and public order in our dream society.

Oba Ajibade Alabi, noted that a society that is well grounded and founded on the rule of law and access to justice devoid of arbitrary exercise of power must run on well-define and established laws.

According to the royal highness, these are the basics for any democracy without which our society shall be in chaos.

The Oba added that the event is unique, noble, worthy, remarkable and monumental.  It is a result of collective efforts fuelled by courage, stirred by passion inspired by dedication and commitment, propelled by the desire to bring justice delivery to the doorstep of the Ekiti South West Local Government.

The Kabiyesi, commended all Ilawe people who contributed in one way or the other  and the state government  for the success of the new court in Ilawe-Ekiti.

Present at the official commissioning include the local government coordinating director, Mr. Yinka Aborisade, Barrister Kola-Kolade Amire, APC legal adviser in Ekiti, the Arajaka of Igbara-Odo, Oba Edward, traditional chiefs in the community, judicial officers and many others.

Race to Save Judiciary from Justice Delay