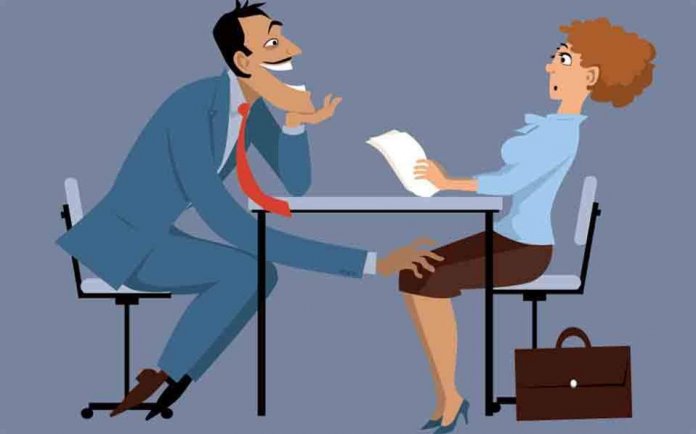 Sexual harassment is an insidious disease in the workplace. It creates a dysfunctional working environment not just for those directly involved but also for other staff. It deprives people of dignity and entrenches discriminatory practices which ultimately encourage mediocrity. In a country like Nigeria with high unemployment rate and deep-rooted patriarchal norms that relegates women, the problem is epidemic. It must be pointed out that sexual harassment knows no gender, it is however said to be more common with women.

Unfortunately, there is no express legislation on sexual harassment in Nigeria. Nigeria’s employment law is perhaps the most outdated in the world. Apart from the fact that the main legislation on employment was enacted over four decades ago[1] with no significant amendments, the law applies only in limited circumstances[2]. This means that our employment law has not taken into cognizance the changes in human behavior that has been orchestrated by Information Technology and the global shift in values.

The National Industrial Court of Nigeria (NIC) has however, come to the rescue. Bolstered by the amendment of the Constitution[3] which imbued it with the powers to apply international best practices and labour standards and international conventions[4], the Court made provisions in its 2017 Rules for sexual harassment claims.  Order 14 of the Rules defines sexual harassment in broad terms; it can be physical, verbal or non-verbal in nature. Importantly, quid pro quo harassment where an employer, supervisor, member of management or co-employees seek to influence employment, promotion, discipline, salary increment, etc., in exchange for sexual favours is also covered. Prior to the Rules, the Court considered cases of sexual harassment under the Fundamental Human Rights Rules.

In most cases of sexual harassment, the perpetrators are high level staff, management or the employer (owners of the business). This obviously poses a challenge to the ability of employees to complain and even when they do, chances are that the complaint would not be treated. The complainants also run the risk of losing their jobs. Given the rate of unemployment in Nigeria, this is a great obstacle to curbing sexual harassment in the workplace. This conundrum has created a safe haven for sexual perverts, masquerading as bosses. The effect is that despite the high rate of sexual harassment incidents, they are hardly reported.

In the exercise of its powers under the Constitution and taking into cognizance international norms on sexual harassment in the work place, the NIC has held that an employer can be held vicariously liable for sexual harassment committed by its employees. The landmark case was in the case of Ejike Maduka v. Microsoft[5]. The most significant aspect of the case is that it places a duty on employers to have a policy on sexual harassment and to investigate cases in line with the policy where they are reported.

Maduka was the enterprise marketing manager of Microsoft Nigeria Ltd, Nigerian subsidiary of Microsoft Corporation (the second respondent). she claimed that her employment was terminated as a result of her refusal to give in to sexual advances from her immediate boss, Mr Onyeje (the third respondent), who was the country manager and CEO of Microsoft Nigeria Ltd. Maduka consequently filed an action at the NIC under the Fundamental Human Rights Enforcement Procedure Rules[6]. She requested that the NIC declare that her termination constituted a blatant infringement of her rights to dignity and freedom from discrimination under the 1999 Constitution (as amended); and the African Charter on Human and Peoples’ Rights (Ratification and Enforcement) Act.

Microsoft Corporation sought to strike its name from the case on the basis that it was a separate legal entity from its Nigerian subsidiary and did not directly order the applicant’s termination.

Decision of the NIC

The Court held that both Microsoft Nigeria and Microsoft Corporation were liable on the principal- agency and co-employment principles. The Court found that Maduka’s allegations that the third respondent had consistently tickled and touched her and other female workers in the office against their will and despite their protests had been proved. The court noted that there was no evidence that the sexual harassment complaint was investigated as Maduka was not invited for an interview nor was there an investigation report. Instructively, in highlighting the basis of their liability the court held thus:

“….I find that by the inaction and silence of the 1st and 2nd Respondent, they both tolerated and ratified the 3rd respondent’s conduct which is against their policy of prohibition and non-tolerance of sexual harassment, gender discrimination and retaliatory action. I hold that they are both in breach of their duty of care and protection to the applicant and are vicariously liable for the acts of sexual harassment carried out by the 3rd respondent within the apparent scope of authority they entrusted to him”.

The court awarded the sum of N13.225m in damages against each respondents and ordered Microsoft Nigeria to implement its sexual harassment policy to prevent re-occurrence.

The NIC has consistently applied the principle in Maduka’s case. On 24th November, 2016, the court restated the principles in Pastor (Mrs.) Abimbola Patricia Yakubu V Financial Reporting Council of Nigeria & Anor[7].  In this case, the claimant was subjected to seductive advances, obscene talk, incessant local trips, sensuous compliments, & gestures, even during pregnancy, by the 2nd defendant. The claimant’s refusal to succumb earned her a punitive transfer, and eventually, termination of her employment. The Court resolved the matter in favour of the claimant, directing that she be posted to any other appropriate office relevant to her field of study in Lagos, but not as a Personal Secretary to the 2nd defendant. The sum of N 5,000,000.00 (Five Million Naira only) was also awarded against the 2nd Defendant.

Another case is Stella Ayam Odey v. Ferdinand Daapah & Cuso International.[8] Here, the Claimant was subjected to sexual harassment from a week after her employment to a period of 6 months thereafter. The harassment included statements by the 1st respondent that her voice arrests him, slapping her buttocks and embracing her against her consent. When the claimant’s wedding invitation was given to the 1st defendant, he demanded the Claimant resign but she refused. Consequently, her employment was terminated. The court awarded N16,862,511.00 (Sixteen Million, Eight Hundred and Sixty-Two Thousand, Five Hundred and Eleven Naira) as damages.

In Dorothy Adaeze Awogu v. TFG Real Estate Limited[9], one of the Claimant’s complaints of discrimination was that she was directed to use her beauty to lure men to patronise the Properties displayed by the defendant. Her employment was subsequently terminated for, amongst other things, failure to get customers with her beauty. The Court awarded the cost of N2,500,000.00 (Two Million Five Hundred Thousand Naira Only) against the Defendant[10].

Legislative inertia on the subject of sexual harassment over the years had encouraged unhealthy workplace practices and enthroned a culture of silence by victims of sexual harassment. Employers were simply not motivated enough to take a firm stand against the practice because there was no express legislation setting out their liability for failure to do so. The position of the NIC in Maduka and the other cases is therefore very significant. Firstly, it is a step forward in curing the major impediment to curbing sexual harassment in the workplace, which is the refusal of employers to investigate because senior members of management or owner(s) are often involved.

Secondly, it is now mandatory for employers to design a firm policy on zero tolerance of sexual harassment, publish it to their employees and follow through with the remedial process. Organizations must be wary of the risk to reputation and monetary damages that may ensue for their failure to do so. Apart from having a policy in place, management and all staff must be trained on the policy. This is key to limiting liability.

Thirdly, for companies with international ties, the international parent company needs to now take more than a casual interest in the happenings within their subsidiaries on issues bordering on sexual harassment. This is good news because affected staff can directly petition the parent company and avoid being victimized by reason of the complaint. It is no longer enough for parent companies to claim they were not directly involved in the decision leading to the termination of employment. This should put randy bosses in check in such multinational companies.

On the part of the employees, they now have recourse in the event of sexual harassment in the workplace. They must however know that the protection offered by the Maduka’s precedent and indeed the law can only work when they take action. They may suffer temporarily but no cost should be enough to assert your dignity. Sexual harassments should be promptly reported to the appropriate official as stated in the policy. Where the employer fail to act or put a stop to it, the affected party  should speak to legal practitioners on options available to them.

Maduka’s case and the current judicial approach by the NIC is a giant leap in the move to reduce sexual harassment in the work place. The application of the principles evolved by the court will go a long way in holding sexual harassers and employers that shield them accountable. In the long term, this will enthrone a new culture in the work place in Nigeria. Judicial ‘activism’ however is no substitute for a clear legislation on the issue. The National Assembly must wake up to the reality of the new world.

[2] The Labour Act applies only to manual and clerical staff

[3] The Constitution of the Federal Republic of Nigeria (Third Alteration) Act No. 3 of 2010 elevated the National Industrial Court to the status of a superior court with expanded jurisdiction and powers

[4] There are however issues with the practical application of the power. The author of this article had previously commented on some of the associated issues in a widely circulated newspaper in 2016. It is gratifying that the court amended its Rules shortly thereafter and some of the issues raised were addressed. See “The Power of the National Industrial Court- A Review of Aloysius v. Diamond Bank”, by Efe Etomi & Elvis Asia, Thisday Newspaper, 31st May, 2016, available online at https://www.pressreader.com/nigeria/thisday/20160531/282462823178104

[6] There is now a special procedure for sexual harassment claims under the 2017 NIC Rules. This may have been informed by the special procedure adopted in the case. It can however be argued that the NIC does not have jurisdiction over fundamental human right cases.

The Nigerian Christian and the Imperative of Judicial Activism for...