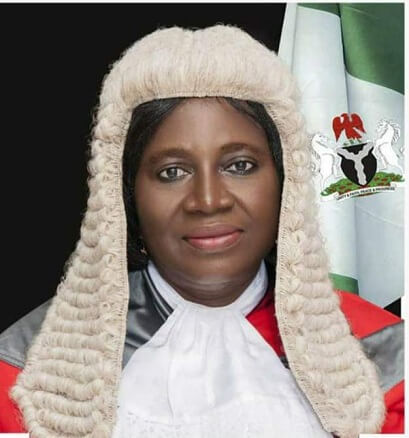 The Chief Judge of Taraba State Hon. Justice Josephine Yakubu Tuktur is set to retire on the 15th of June, 2019. To mark this remarkable event, Taraba Lawyers have paid glowing tribute to the Chief Judge outlining her achievements during her tenure as Chief Judge which lasted seven years from 2012.

When a female is appointed to the Bench of the highest Court of the land, she is bound to set a record of sort. Such was our expectations when she was appointed Acting Chief Judge of Taraba State on the 12th day of April, 2012 and finally substantive Chief Judge/Chairman, Judicial Service Commission on the 13th day of December, 2012 upon the retirement of the then Chief Judge Justice Adamu Aliyu to which she did not in any way disappoint at all.

Justice Josephine Yakubu Tuktur has set the unprecedented record of being not only the first and as of yet only female Judge of the Taraba State Judiciary but is also the third Chief Judge of the State after Justice Mahmud Mohammed, former Chief Justice of Nigeria and Justice Adamu Aliyu.

Born on the 15th June, 1954 at Donga in the present day Taraba State, she began her academic career at Our Lady’s High School, Kaduna, thereafter to Queen of Apostle now Queen Amina College in Kaduna State from 1962 to 1968 and later completed at Government Girls Secondary School, Shendam, Plateau State from 1970 to 1973. She bagged her Diploma and LL.B in law at Institute of Administration, Ahmadu Bello University, Zaria, 1980 and BL in Lagos in 1981.

My Lord began her working career early in life when she got a job as a Machinist with the defunct Bank of the North in Jos, Plateau State from 1973 to 1974 and later with the Judiciary as Clerical Officer from 1974 to 1975 where she rose through the ranks to Chief Magistrate/Director, Personnel Management.

My Lord was appointed High Court Judge in 1993 and upon the retirement of Justice Adamu Aliyu OFR, she was appointed Acting Chief Judge and later confirmed the substantive Chief Judge on the 13th December, 2012.

Since her appointment, My Lord, Honourable Justice Josephine Yakubu Tuktur has displayed excellent leadership as well as exceptional judicial and administrative qualities for which she is generally commended.

Having put in thirty five years of meritorious service to her father land, Justice Josephine Tuktur will be retiring on a very sound note with a lot of activities lined up.

A guard of honour is expected to hold at the old High Court Complex beginning from 8:00am dot. There shall be a valedictory session and dinner night all in her honour at the gym hall of the Jolly Nyame Stadium same Friday, the 15th June, 2019 at 8:00pm. A book has being written in her honour which will be unveiled at the dinner. The book which is titled “ESSAYS IN HONOUR OF JUSTICE JOSEPHINE Y. TUKTUR AND THE LEGAL DIRECTORY OF TARABA STATE” is a master piece written by one who has seen it all. From the little that we gleaned from the book, we make boast that it is a deviation from the normal convention of book writing as it contains a comprehensive data of all High Court Judges, Magistrates and Lawyers in various fields in Taraba State. It is a must read for all in Taraba State as the author did carried out a comprehensive research on the book. No need revealing much to you as we enjoin all to get their own copy. Finally, there shall equally be a Thanksgiving service in her honour at RCCN Church, Magami, Jalingo on the 15th June 2019.

We congratulate Milord and we wish her a successful retirement. No doubt she has left a legacy for incoming Chief Judge to build on.

Once again congratulations HONOURABLE JUSTICE JOSEPHINE YAKUBU TUKTUR from us at Taraba Lawyers.

We congratulate my Lord and wish her a fulfilling retirement.